Creed II is a Must See

With the holiday season underway, good movies get released. Creed II is no exception to the holiday movie release rule. The People’s Redhead went and saw it on opening day, and it is fantastic.

DISCLOSURE:  No spoilers below, but even if there were, shut the fuck up and quit bitching!

Creed II starts off by highlighting the success of Adonis Johnson (aka Adonis Creed), played by Michael B Jordan. As one would suspect, Creed is floating along and then he encounters tremendous obstacles that he must overcome. The film is generally based off this premise. However, I felt the need to write this film review after reading some of the other bullshit reviews being published.

I have read that this film is not as good as the first Creed. What a fucking original thought, wow. Sequels to films are not expected to surpass originals, but rather compliment them, which this film easily does. Further, we at The Weigh-In are not going to pretend to be on the same level of review of established cinema experts such as Sisquo or Eggbert (mispronunciation intentional you rubes). We are not changing the well-established landscape of film critique, but we want to discuss everything combat sports related. Currently, film reviews seemed to be dictated by a bunch of desk warriors who want to bash everything in order to elicit readership. To this, I say, go fuck yourself!

Michael B. Jordan’s portrayal of Adonis Johnson-Creed has displayed layers that I never considered while watching the widely celebrated Rocky series. Adonis Creed struggles to carve his own path and is not only facing intense competition, but he is essentially fighting the ghost of his father’s legacy. Jordan captures this and his approach to the character puts the viewer through the full spectrum of emotion. For those of you reading this, I cannot quite articulate Jordan’s performance well enough to do him justice.

I want you all to think of a time you were watching a film and the hair on the back neck of stood up. I want you think about a film that inspired you to go out and try what you just watched on the big screen. Think about a time that your eyes were watery and you held back tears. Michael B. Jordan makes the viewer feel all of these things because of his brilliant performance. It also does not hurt that the man is super jacked. (See his workout routine below)

On top of Jordan’s performance, which is next level, let us not forget about his supporting cast. Bianca, played by Tessa Thompson is more prevalent in this film and her performance keeps getting better. In Creed II, Bianca plays a more vital role to Creed’s life and the parallel between what she is going through as compared to Apollo’s wife (Creed’s mother), is understated and brilliant. Thompson is showing a wide range of depth in her own character that gives the audience no choice but to feel for her position.

Last but certainly not least, Sly Stallone once again crushes his role as Creed’s uncle. The entire film has magnificent foreshadowing into the magnitude of the decisions Rocky made during his own storied career. Rocky cares for Adonis so much and does not want to see him make the same mistakes. However, at the same time, Rocky sees Adonis has something more, something Apollo did not have and Rocky is fully invested in young Creed.

Some other honorable mentions in this film is the return of Ivan Drago, played by Dolph Lundgren. One can only wonder what this means for the series moving forward. Lundgren looks great by the way, shout out to the Russian Gas!  Brigitte Nielsen even returns to the series, which wow! Shout out to Brigitte, she needs to consume some Russian Gas!

Wood Harris returns in Creed II and crushes his role as Tony “Little Duke” Burton. He trains Creed and hopefully this will be the case moving forward because I am a huge Wood fan… That’s what she said. Harris is a great actor who murders every role. Some of you readers may recall him as Avon Barksdale from the HBO hit series, The Wire.

Creed II is excellent and in today’s big box office superhero release bullshit, a film worth actually paying to see and not illegally downloading. Right, you all want me to believe that you are not currently on some Russian website trying to download Creed II, have more sense people.

I am not going to rate Creed II with a letter grade or star count like other sites. I am just merely telling everyone that the film compliments the first film and I think the characters reach new levels of depth that is truly brilliant. I would pay to see this film multiple times and that should speak volumes. After all, us redheads do not get out much, on account of the UV rays and all that.

Go see Creed II and be glad you listened to us here at The Weigh-In. 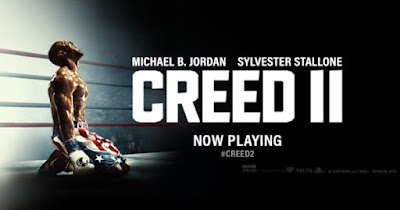