Survivor Series emanated this evening for it’s 32nd installment from the Staples Center in Los Angeles. The loaded card featured seven bouts, with only the Cruiserweight Championship on the line, as the Red and Blue brands went head to head for brand supremacy.


Leading up to this match, Mandy Rose replaced Charlotte for Team Smackdown after she was inserted as a replacement against Ronda Rousey due to Becky Lynch sustaining a concussion and having her face broken at the hands of Nia Jax this past week on RAW. On RAW’s side, Natalya and Ruby Riott were replaced with Bayley and Sasha Banks by team captain Alexa Bliss after a fight broke out between them during the Survivor Series kickoff show. As we approached the end of the match, Bayley and Sonya Deville found themselves outside the ring and could not make their way back in before the referee reached the count of 10 hence leaving them eliminated. This left Asuka to fend for herself against Sasha Banks and Nia Jax. Next as Banks gained the upper hand, she scaled to the top turnbuckle but was shoved off by her own teammate Nia Jax. This allowed Asuka to secure the Asuka Lock for the submission. Jax then entered the ring and annihilated Asuka with three leg drops followed by the Samoan Drop for the pinfall victory.


This match pitted the Intercontinental Champion from RAW, Seth Rollins, against the United States Champion from Smackdown, Shinsuke Nakamura, in another brand versus brand contest. These men quite frankly beat the snot out of each other in this bout. Prior to the conclusion, Nakamura withstood a top rope superplex that Rollins held onto and rolled into another suplex whereas Rollins absorbed a bevy of strikes and even the dreaded Kinshasa. In the end, it appeard Rollins would suffer the fate of another Kinshasa until he ducked out of the way and countered with a pair of super kicks that set up the Curb Stomp for the pinfall victory.


WWE tag team bragging rights were on the line as the Smackdown tag team champions Cesaro and Sheamus battled the RAW tag team champions AOP. This match reached it’s conclusion as Drake Maverick found himself cornered by the Smackdown trio and Maverick, in terror of the Big Show who had his hand wrapped around is throat, peed his pants…I can’t believe I just wrote that but it happened. This distraction allowed AOP to trap Sheamus and lay waste to him to solidify the victory for RAW and put them up 3-0.


Buddy Murphy made the first defense of the title he won in his native Australia at Super Showdown from Cedric Alexander. This was an entertaining match that the WWE Universe was surprisingly intrigued by. Ali unfortunately did not land his 054 (a gravity defying 540 splash) but did execute an awe-inspiring Spanish Fly on Murphy from the top of the German announce table. Unfortunately Ali fell short as Murphy hit the Murphy’s Law in the end for the victory.


This match got off to a ferocious start as Samoa Joe was the first eliminated when he was the  recipient of a Claymore Kick delivered by McIntyre. Shortly after, an inevitable meltdown between Strowman and McIntyre occurred and chaos ensued. This culminated with Smackdown taking advantage and laying Strowman across one of the announce table for Shane McMahon to give the fans an “Oh shit!” moment. Shane-O-Mac proceeded to leap from the top turnbuckle and landed on Strowman driving his elbow through his chest and shattering the table in the process. The next elimination came after Mysterio hit the 619 and “Dropped the Dime” on Finn Balor for the pinfall. A beaten Shane McMahon reemerged to hit the Coast to Coast on Dolph Ziggler to eliminate him. Hardy was then eliminated by Strowman after he broke him in half with a power slam and subsequently did the same to Mysterio to quickly diminish the blue brand’s numbers. After chasing down the Miz, Strowman then eliminated him as well with another power slam. Shane McMahon, the last man standing for RAW, stood up to Strowman only to be drop kicked into the corner and then driven into the mat with a running power slam to finish of Team Smackdown. After the conclusion of the match, RAW captain and interim general manager Baron Corbin jumped Strowman from behind which most likely won’t go well for him on Monday night.


This match was supposed to be champion versus champion until Becky Lynch was concussed and bloodied up on Monday night. On Tuesday night, Charlotte was selected by Becky to take her place against the “baddest woman on the planet.” This match was phenomenal and arguably stole the show. These ladies put on a clinic, particularly in submission wrestling, until the very bitter end. Ronda, seemingly in control, hit the Piper’s Pit and attempted to lock in the armbar submission when Charlotte escaped and rolled out of the ring. Ronda decided to pursue Charlotte out of the ring only to be met with a kendo stick shot to the gut. Charlotte snapped and proceeded to assault Rousey with multiple kendo sticks, breaking one in the process. Then when multiple referees attempted to quell the situation, Charlotte laid waste to all of them and continued her massacre of Rousey as she added a steel chair to the equation. This was an assault unlike one the WWE Universe has seen in quite a while and they responded with a “Thank you Charlotte” chant as she exited the arena with a maniacal expression on her face.


The WWE Universe fully anticipated this match to be A.J. Styles squaring off with Brock Lesnar in a rematch of their confrontation at last year’s Survivor Series when both were champions of their respective brands. A wrench was thrown into those plans this past Tuesday on Smackdown when Daniel Bryan shocked the world and won the WWE Championship. This match started as a mauling…Brock hit at least ten suplexes and an F5 on Bryan before he unmercifully lifted him up from the canvas instead of allowing the referee to count to three. Bryan was then hoisted up for another F5 but Brock spun him around so his feet hit the ref in the head leaving him  incapacitated briefly. Bryan took the opportunity to kick a perfect field goal between Lesnar’s legs and turned the tides of the bout. Bryan seemed a tap away from the upset of the evening, if not the year, as he had the Yes Lock engaged. Lesnar was able to power out but Bryan quickly readjusted and locked in a triangle choke. Lesnar finally picked up Bryan and threw him over his shoulders to finish him off with another F5. 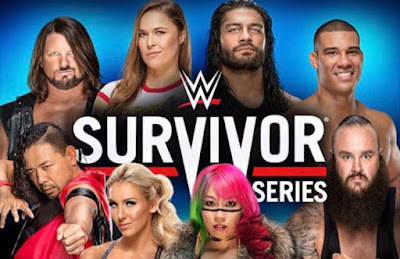