Super-Lightweight battle to light up Las Vegas on May 7; Heavyweights Hrgovic and Zhang set to clash

Montana Love and Gabriel Valenzuela will clash in a mouthwatering Super-Lightweight battle on the undercard for Canelo Alvarez vs. Dmitry Bivol at T-Mobile Arena in Las Vegas on Saturday, May 7, live on DAZN, excluding Latin America and Mexico. In the U.S. & Canada, the event will be offered exclusively on DAZN Pay-Per View (PPV). Tickets will go on sale on Wednesday, March 23.

Love (17-0-1, 9 KOs) will fight under the Matchroom banner for the second time and on back-to-back Las Vegas fights, having dispatched Carlos Diaz inside three rounds at the MGM Grand Garden Arena in December. The Cleveland man is ranked #12 with the IBF and will look to crash into the top ten in style on The Strip but will need to be on his A-game against Valenzuela (25-2-1, 15 KOs).

The Mexican crashed into top ten with a road-win over Robbie Davies Jr. in London last February and has recorded a pair of KO wins in his homeland since that night. The May 7 showdown is a huge opportunity for him to sparkle in the spotlight alongside his fellow countryman Canelo, in a fight in association with Clase Y Talento and Canelo Promotions.

“Nothing changes on May 7,” said Love. “He’s just another body in the way.”

“I’m so proud to be sharing a spot on the card with such a great Champion, Canelo Alvarez,” said Valenzuela. “We’re prepared for this and training very hard for this fight against Montana Love. He’s a tough opponent but we’re going to come very hard to get the victory. That night Mexico is coming with everything we have.”

Hrgovic (14-0, 12 KOs) sits #3 in the IBF rankings and the giant Croatian has been hunting a dance partner for a showdown to name the mandatory challenger for the title held by Oleksandr Usyk. The 29-year-old Olympic bronze medalist has cut a lethal swathe through the pro ranks to sit in a prime position for a deserved shot at the big prize, ending all but two of his fights inside the distance, and not going past the fifth round in his last seven outings.

A host of Heavyweights were offered the clash with the dangerous Croat, but not until it came to #13 ranked Zhang (23-0-1, 18 KOs) was a dance partner found, with the lofty Chinese star accepting the challenge. The 38-year-old has been circling for a major showdown, and ‘Big Bang’ gets his wish against Hrgovic in Sin City with the two KO artist promising to leave it all in the ring with the stakes so high.

“I’ve been waiting for this opportunity for more than year,” said Hrgović. “Finally, I have an opponent willing to face me for the chance to fight for the IBF World title. So many fighters turned down this challenge so credit to Zhang for being brave enough to accept.

“I know he’s a good opponent. He won silver at the Olympics so that means he’s a good boxer, but he is too slow on his feet, and I believe I have better the qualities. My speed, stamina and footwork will be too much for him. I will break him down and I will beat him.

“I’m now only one fight away from my dream of boxing for a World title and nothing is going to stop me. Canelo is the face of boxing and I’m excited to get this opportunity on such a big show. I'm ready to show the whole world that ‘El Animal’ is coming!”

“I am very happy that this fight is going to happen,” said Zhang. “I’ve been waiting on an opportunity – now it’s here and I’m not going to let it pass. When no-one else from the top 15 wanted to face Hrgovic, I told myself I had to do it for me and for the sport of boxing. This is the most important fight of my whole career. I’m all in. Don’t miss it!”

“Finally, we’ve found an opponent willing to accept the challenge,” said promoter Kalle Sauerland. “Having gone through the IBF rankings twice, Zhang has stepped up to face Filip Hrgović in an IBF World title final eliminator. We now have ‘El Animal’ versus ‘Big Bang’ for a shot at the biggest prize in boxing. This epic battle is going to light up T-Mobile Arena in Las Vegas, where fans can witness the next Heavyweight Champion of the World in action.”

Tickets will go on sale starting at $105 (plus fees) on the following dates and times (all times PT) at AXS.com.

“These are two great fights for a massive night in Las Vegas,” said promoter Eddie Hearn. “Montana Love is ready for big fights now and in Gabriel Valenzuela, he’s got a huge test of his ambitions at the very top level – Gabriel will lay everything on the line and will have the Mexican fans roaring him on, so Montana will need to produce his best.

“I love the Heavyweight dust-up between Filip Hrgovic and Zhilei Zhang. It’s been a long-time coming for someone to step up to the plate and fight Filip, credit to Zhilei and his team for taking on the challenge. Both men carry huge power, and they know that victory takes them one step closer to sport’s ultimate prize – Heavyweight Champion of the World. There won’t be a backwards step taken when they rumble, it’s going to be fireworks on an already electric night.” 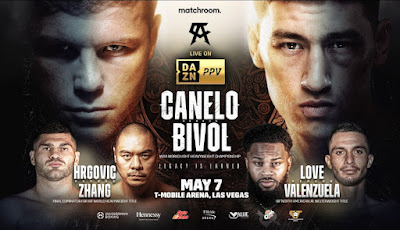