For nearly a century, Atlantic City's Boardwalk Hall has hosted some of the biggest fights in the city's rich boxing history. Notable fighters such as Joey Giardello, Mike Tyson, Bernard Hopkins and Arturo Gatti all fought under the legendary venue's lights. This Saturday, Thomas LaManna's Rising Star Promotions fight card will join a list of over 200 boxing shows that the venue has played host to date.

Montrel, who is making his AC debut, won four fights in 2021, one by way of technical knockout. Montrel's last fight was on July 3rd in Agua Prieta, Mexico, where he defeated veteran fighter Mauro Loreto by unanimous decision in an eight-round contest.

Philly fan favorite Chris Brooker (16-9, 6 KOs) makes his much anticipated return to the ring, when he squares off against Brooklyn's Omar Salem (10-1, 4 KOs) in a six-round, super middleweight, co-feature bout. Brooker, who is no stranger to AC, is coming off two defeats to tough opponents in 2021. He traveled to Montreal on December 12th where he lost to Steve Rolls by knockout, and Newark, NJ on July 31st where he suffered a technical knockout defeat to former world title contender Andre Dirrell. Never one to shy away from a tough opponent, Brooker looks to halt his losing streak at two when he steps into the ring with Salem.

Salem, who has one career loss by split decision, last fought on September 3, 2021, a four-round fight he won by unanimous decision. His match with Brooker will be the fourth time the fighter has fought in AC. A review of Salem's resume indicates that he may have his hands full with the tough veteran Brooker.

Popular local attraction Decarlo "3Mendo" Perez (18-6-1, 6 KOs) will take on New Orleans' Rance Ward (6-3-1, 2 KOs) in a super middleweight bout scheduled for six rounds. The AC native, Perez, has fought in his hometown nine times over the course of his career. Perez is coming off a two fight winning streak, having last won by technical knockout in 2021. Ward looks to continue his winning ways this Saturday, having won two of his last three fights in 2021.

Other Jersey Shore area fighters on the card include Lanoka Harbor's Danny Murray (5-5) and Manalpan's John Leonardo (6-0-1, 4 KOs). Murray, who has lost his last three contests, looks to rebound in the resort city against New York's Michael Hughes (2-1, 1 KO). Hughes last fought in July of 2021, when he was defeated by technical knockout. Murray and Hughes will meet in a six-round, junior welterweight bout.

John Leonardo will continue what appears to be a busy year, when he takes on Aguadilla, Puerto Rico's Alberto Nieves (4-1-1, 2 KOs) in a six-round, bantamweight bout. Leonardo, who is scheduled to fight again in May, is coming off a second-round technical knockout victory on January 29, 2022. Nieves last fought in 2019, a bout in which he was knocked out in the first round.

For more information on Saturday night's card at historic Boardwalk Hall, check out the Rising Star Promotions Facebook page. To order tickets to this great night of boxing, click here. 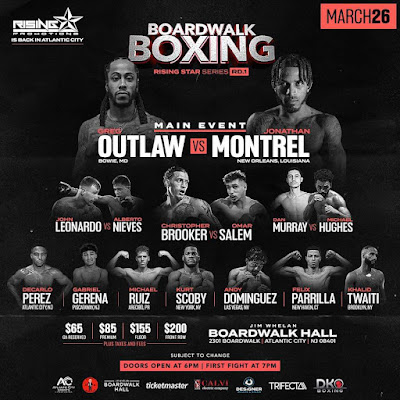