“An incredible building here for an incredible fight, an incredible moment for the sport of boxing. April 30 the undisputed Lightweight Championship between Katie Taylor and Amanda Serrano – live on DAZN from Madison Square Garden.

“We all felt and hoped that this event would be a game changer, this event would iconic, historic and break the records. Last week for the pre-sale we recorded the second biggest pre-sale in the history of boxing in 140 years at Madison Square Garden.

“Of course, this is the biggest female fight of all time but it’s also one of the biggest fights in boxing, April 30 the world will stop to watch these two great fighters change the sport and take women’s boxing to a new level.”

“I think this is a fight that transcends not only women’s boxing but potentially if we get this right to transcend the sport of boxing. The energy in New York last week, the tickets sales, the turnout from the media today, the reaction on social media, Jake’s involvement. There are so many ingredients to this that give it the potential to really cut through.

“When you have the opportunity with a boxing event to really cut through to mainstream sport, you want to give it your best shot, and we’re determined to do that. We’ve got a couple of months to do that with a fantastic group of people pushing it, we’re really excited about the opportunity we’ve got to celebrate women’s sport and go beyond the four walls of boxing.

“Eddie and I have been in the States last week and he’s been stopped in the streets to talk about this fight far more than you would do for a women’s boxing event. I think that we’re seeing that it’s cutting through, we’re confident when we look at your numbers, the numbers on social media, the numbers on the content we’ve already got.

“This is a fantastic opportunity to grow our subscription audience and drive a massive audience on DAZN in many countries around the world – notably here in the UK, Ireland and over the States. A huge opportunity and one we’re really excited about.”

“This all started because of you [Eddie] and Joe when Jake made his debut on DAZN just two years ago. To think we’re here now with the biggest fight in women’s history, the biggest fight in boxing this year, is of course a credit to Eddie Hearn, Matchroom, DAZN, to Katie and Amanda, but also to my partner Jake Paul.

“Jake and I have been very fortunate in our careers today, mine longer than his given I’m a lot older, we don’t need to be doing this, but we want to be doing this. This is a privilege, an honour, this is something that’s disrupting sports as a whole led by Jake, Katie and Amanda.”

“This is very serious, I’m just excited for April 30th first and foremost. People better get their tickets at MSG.com because otherwise they’ll be sitting in the nosebleed section the way these tickets are selling.

“I want to give these ladies a round of applause for what they’re doing, what most people in boxing aren’t doing, the pound-for-pound two best going at it. This is what boxing needs more of whether it’s male or female, they’re putting it all on the line for this fight which is what makes it big.

“This is unprecedented and more boxers across the sport should take notes from these two ladies, make the big fights happen if you’re one of the pound-for-pound best and tell your promoters you want these fights. That’s what these ladies did and that’s why we’re here.

“To me it doesn’t matter because I’m passionate about it, if people want to show me respect then cool, if not then cool. I’m still going to be doing my thing but like the hat says, all I want to do is bring more to this sport than I took from it – that’s what I want to do.

“I believe Amanda will win, stylistically. All credit to Katie Taylor she has an amazing career and is an amazing person, but stylistically the way Amanda comes forward and her body shots. We saw Katie Taylor have a little bit of trouble with that against Persoon and she was head hunting and not necessarily going towards the body. That’s what Amanda brings, a power puncher that comes forward, unlimited cardio, that’s why I’m excited about this. Obviously, it’s going to be a great fight, but I believe in Amanda.”

“I want to thank London for having me, it’s a beautiful city. The struggle has been real but I’m super happy and excited that I’ve finally get to see a little bit of light at the end of the tunnel with this fight with Katie Taylor. We’re making history and that’s what I want to do, I want to continue to open the doors for the new generation coming into the sport.

“I’m a woman for equality and we all talk about equality, on this table multiple times, we’re making history at the Garden being the first women to headline. We’re making the biggest payday for both of us, and I think we should just continue to make this iconic, make changes to this game and if Katie Taylor is willing and ready and able to make this an equal fight of 12 rounds of 3 minutes. If we want to make change, I think we should pave it right now on DAZN. This is all about equality and we should make the change right now.

“I understand that this fight is iconic but if we want to make a change for the future and get people to notice it, get these promoters to not talk badly about women, I think we need to take a stand.

“My plan is to fight smart, to be smart on April 30. I know I have all the tools to beat Katie Taylor, I just have to go out there and be smart – victory will be mine.

“I have everything, there’s no questioning my heart, my skills, my power and my chin. There’s nothing I think Katie Taylor has that will answer the questions that need to be answered. I have Latin blood and all the heart in the world.”

“I don’t think changing to 12 3 minute rounds will make a difference, this event is already iconic the way it is. The fact the pre-sales are the second best in MSG history says it all really, this fight is more important than we realise, and this proves that the perceptions have changed already. Boxing is boxing regardless, and the fight is already iconic the way it is.

“I think we’re making a stand the way we’re actually fighting each other in the first place, the best fighting the best. This fight is going to determine the best pound-for-pound female fighter in the world so we’re already making a stand by taking this fight.

“This is the fight I’ve wanted from the get-go, ever since I turned pro, I had me sights set on Serrano. I’m just so excited the fight is happening now; I do genuinely believe this is the best fight and most exciting fight in boxing right now. The fact it’s headlining Madison Square Garden and the pre-sales were the second best in boxing history, means this fight is more important than we realise and proves that there is a strong appetite with the public for these big female fights.

“Not only are we breaking the ceiling for female purses, but we have actually changed perceptions of the sport and if our careers have only achieved that then all the hard days in the gym have been absolutely worth it.

“I’m obviously expecting the toughest fight of my career and I’m expecting that, I know that I won’t be found short on grit and heart, I know my mind can take me to places I have no right to go because I’ve been there before both in the gym and on big nights. The whole world has seen me do it, I don’t think anybody has ever asked the question has Katie got what it takes to go to that place and win the fight in the trenches, that question has been answered. I’m not sure that Amanda has answered that question yet and her legacy will depend on the answer to that question, and I guess we’ll find out April 30.” 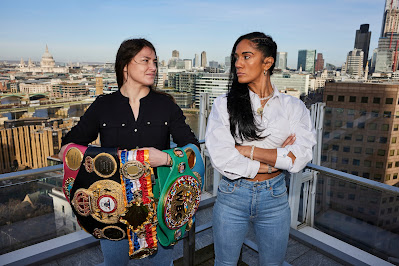