The final stop on the Road to Wrestlemania landed at the Jeddah Super Dome in Jeddah, Saudi Arabia. The WWE took things a step too far this time with their semi-annual cash grab, in my opinion, by holding the event that will likely mold the landscape for the Showcase of the Immortals overseas. The card featured seven matches and was headlined by the Men’s Elimination Chamber match with the WWE Championship on the line.

No one saw this match coming to fruition as Goldberg recently shocked the WWE Universe when he returned to Smackdown to challenge The Tribal Chief for his Universal Championship - and of course it was set for Saudi Arabia because it’s a known fact that they put out extra money for extra star power as part of their agreement with WWE. Now we knew that Roman Reigns would retain his title but this match was absolutely terrible - something that it pains me to say for how much of a fan I‘ve been of Goldberg over the years. Goldberg’s most significant offense consisted of a couple of spears as he was never able to execute his patented Jackhammer before Reigns deeply cinched in a guillotine choke which Goldberg eventually succumbed to.

Alexa Bliss vs. Bianca Belair vs. Nikki A.S.H. vs. Rhea Ripley vs. Liv Morgan vs. Doudrop

The stakes were high for the Women’s Elimination Chamber match as the winner would earn a shot to compete for the RAW Women’s Champion at Wrestlemania. The match began with Nikki A.S.H. and Liv Morgan as the other four were locked in their respective pods around the ring. The first participant released from her pod was the massive Doudrop who immediately laid waste to Nikki and Liv. The next participant to enter the fray was Rhea Ripley. Ripley wasted little time making the first elimination of the match as she pinned Nikki following a Samoan drop. Alexa Bliss was the next to enter the match as she had her first in-ring action since September. The next elimination came at the hands of Liv Morgan as she was able to pin Doudrop just moments before the final combatant, Bianca Belair, entered the contest. Alexa Bliss secured the next elimination as she executed a perfect Twisted Bliss which allowed her to pin Liv Morgan.

Belair next expunged Ripley from the bout in short order following a KOD leaving her alone in the ring with Alexa Bliss. After Bliss was unable to execute a Twisted Bliss and multiple DDT attempts, Bianca Belair made Bliss the next victim of the KOD allowing her to punch her ticket to Wrestlemania where she will compete for the RAW Women’s Championship.

This contest featured two women who will compete for the Smackdown Women’s Championship at Wrestlemania, champion Charlotte Flair and Ronda Rousey, on opposite teams with the added stipulation where Ronda would need to tie one hand behind her back. The match, which quite predictably never saw Rousey and Flair in the ring at the same time, came to it’s conclusion as Rousey hit the Piper’s Pit on Deville before she trapped her in an armbar to secure the submission victory.

As a result of the ambush he sustained at the hands of Moss and Corbin at WWE Day 1, Drew McIntyre has found himself in arguably the worst feud of his WWE career since he was a member of Three Man Band and unfortunately, it probably will not conclude until Wrestlemania where McIntyre will likely end up battling Happy Corbin. After McIntyre nearly broke the neck of Madcap Moss with a botched Alabama Slam, he put him away moments later with the Claymore Kick despite continued interference at the hands of Happy Corbin.

Despite making appearances in the Women’s Royal Rumble multiple times, Michael Cole made it known prior to the match that this was Lita’s first significant single’s match in 16 years. Lita displayed virtually no ring rust as she gave the performance of someone who could still hang with the current women’s roster. In the closing moments, Lita seemed poised for a monumental upset after she executed the Twist of Fate immediately followed by a moonsault, however, Becky was able to kick out of a subsequent pinfall attempt. As Lita attempted to mount more offense to continue her momentum, she was promptly stifled with The Manhandle Slam which allowed Lynch to escape with her title.

The Usos (c) vs. The Viking Raiders

This match never even started as The Usos ambushed The Viking Raiders in the midst of their ring entrance leaving them in a heap of human debris.

This match created an interesting dynamic as Brock Lesnar already had his ticket punched to challenge Roman Reigns at Wrestlemania for the Universal Championship and should he win the Elimination Chamber, would enter as the WWE Champion as well. The match began as Seth Rollins stepped toe to toe with Austin Theory while the other men remained locked in their respective pods chomping at the bit to enter the bout. Just before Riddle entered the match as the first to be released from his pod, Rollins power bombed Theory through Bobby Lashley’s pod knocking the champ senseless in the process. The fourth man to enter the fray was “The Phenomenal” AJ Styles.

Bobby Lashley was the next to enter the match, however, he had been escorted from the ring by medical personnel. Brock Lesnar proceeded to kick through the chamber wall and inserted himself in the match prematurely. Lesnar immediately F5d Rollins for the elimination, then decimated Riddle for the next elimination, and delivered another F5 to Styles to eliminate him as well. In the midst of all the chaos, it was announced that Lashley had been placed in concussion protocols meaning a new champion would be crowned. The final two competitors were Brock Lesnar and Austin Theory.  Theory attempted to flee Brock by climbing up the chamber, however, Lesnar delivered an F5 to Theory that propelled him from the top of one of the pods. Lesnar then easily pinned Theory to become new WWE Champion setting up a showdown between champions at Wrestlemania. 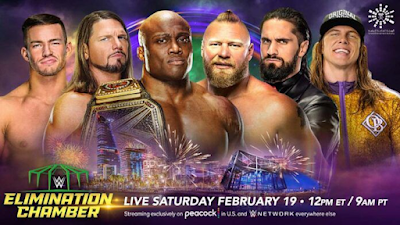