GILL: THIS EUROPEAN TITLE FIGHT MEANS EVERYTHING TO ME

'The Thrill' challenges Guerfi at The O2

Jordan Gill is hoping to put a frustrating 2021 behind him when he clashes with European Featherweight Champion Karim Guerfi on the undercard of Lawrence Okolie's WBO Cruiserweight World Title defence against Michael Cieslak at The O2 in London this Sunday February 27, live worldwide on DAZN (excluding New Zealand and Australia).

'The Thrill' (26-1-1, 7 KOs) was originally scheduled to face Frenchman Guerfi on the undercard of Conor Benn vs. Chris Algieri at the M&S Bank Arena in Liverpool on December 11, but the two-weight European Champion was forced to withdraw from their Merseyside showdown due to an illness.

Gill suffered a horrific cut in the third round of his eight rounder with late stand in opponent Alan Luques Castillo - the 27-year-old was forced to accept a technical draw after the gruesome head clash. The Chatteris man is aiming to kickstart his World Title push by dethroning 34-year-old Guerfi in his first fight for 2022.

“I remember laying on the bed and getting stitches afterwards," said Gill. "It was one of those things that could have happened to anyone at any time. It’s unfortunate that it happened to me. It was a nasty head clash – there was no way the fight was going to continue. When they stitched my head up, they stitched around the artery – it was that deep! It’s lucky that it was on my head and not my face, otherwise it would have been a plastic surgery job. It’s good in one way, bad in another.

“I had a week off and then I was straight back in the gym, keeping fit and keeping my mind active. I knew I was always going to be Mandatory for the European Title. It wasn’t a fight lost because of the technical draw. All in all it was a frustrating 2021 but that’s behind us now and we look forward. 2022 is our year, I’m looking forward to this fight and pushing on to bigger and better things.

“He’s a very good fighter, you can’t take that away from him. I fully respect him – he’s the champion. He did it against the odds, he’s been to the champion’s backyard and won the Title. He’s very experienced and he’s coming to the latter stages of his career. He’s had some big fights, I think he’s a four or five time European Champion. He’s established and he’s a very good pro. I’m looking forward to mixing it with him.

“As the fight gets nearer, I’m thinking of new ways to beat him. I’m thinking of new things to add to my game. We’re not so much preparing for Guerfi, but we’re preparing myself for the best that I can be. I’m looking forward to the fight. I feel like it has been a long time coming. This is my life. I dedicate my life to boxing. I take myself away from my family. I’m here in Rotherham, working every day. This European Title fight means everything to me, my family and the area that I’m representing.

“I think I’m going to put on an absolute masterclass and stop Guerfi mid to late rounds and I’m going to push on, beat up that dosser Isaac Lowe and get a World Title shot. Guerfi is ranked 10th or 11th with the WBC. We’ve just got a new WBC Featherweight Champion. I know he’s got to fight his Mandatory for his first defence but after that I can get the winner." 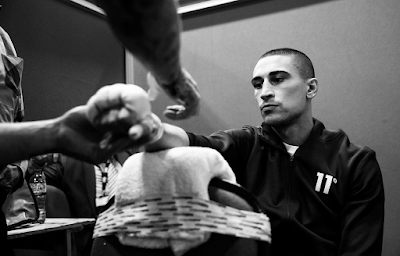