Bold Prediction for McGregor vs. Nurmagomedov

McGregor allows Nurmagomedov to challenge him tonight. You fans of The Weigh-In are in for a special treat. You are not going to see the headlines that every other combat website has going on right now. We here at The Weigh-In pride ourselves on honest reporting without fear of consequences.

What I am referring to is the fact that every other news outlet is referring to this as the biggest fight of all time. Give me a fucking break. If this match ends up breaking any records it has everything to do with McGregor’s star power and nothing to do with Nuragomedov. Honestly, as we find ourselves on the eve of the fight, I am still shocked it is happening. Are we actually going to see Nuragomedov be healthy and report for a major fight?

I take nothing away from Nuragomedov. It is no secret he is a fucking magician on the ground. However, if we truly breakdown these individuals, we have to discuss everything. Khabib has constantly folded under pressure, though his record may not reflect this fact. How soon we forget that Nuragomedov was slated to go against Tony Ferguson four different times. This match never happened due to a series of odd injuries and horrific weight cuts.

So let us all assume Nuragomedov makes it to the fight tonight and UFC 299 goes off without a hitch. What are we talking about now? I for one think, and I am willing to put it out there, McGregor wins! That is right, I am man enough to fucking pick a winner and put my name on it. I am not solely picking McGregor because we have so much in common and both are from Irish decent. Rest assured, the list of things McGregor and I have in common are fucking down right eerie. Please see my list below:

I am picking McGregor because he will once again prove that he is meant to be on the big stage and is one of the best students of mixed martial arts. Nuragomedov is likely to find himself in a similar situation as Eddie Alvarez, gun shy on the ultimate stage in a battle against the UFC’s biggest star. Let us also not forget McGregor is now fighting because it is in his blood.

Think about that last sentence people. McGregor is cashing more checks and breaking more necks than a helicopter salesman at the Catalina wine mixer. McGregor does not have to fight but he is choosing to fight. Everything the man touches turns to fucking gold. I personally hope that he is motivated by how big this event is. The size of this event has little if anything at all to do with Nuragomedov. It pains me to write it people, but it is true. Nuragomedov lost his fan base when the Ferguson fight was cancelled for a fourth time.

Now, he does little if anything to promote this fight. However, the comments he does make sound as if he thinks this is the biggest of the fight all time due to his star power. Other sites will not tell you that this is simply untrue. McGregor is a fucking star and Nuragomedov is someone we all admire but lets us down when it counts.

Let me actually get into to some fight styles regarding this pending bout. Nuragomedov is a ground specialist and if he takes McGregor down and smothers him, it will likely lead him to victory. The question in this fight is going to be one of whether or not Nuragomedov can get in to drag McGregor down. Everyone fears this matchup for McGregor but I think McGregor will rise to the challenge once again.

McGregor’s left cross has goodnight implications. In fact, his power is so dangerous that Will Smith is considering starring in a movie where he plays a physician with a terrible accent studying brain trauma in the individuals McGregor has put to sleep. We do not fact check people, but we do call it as we see it. Honestly, everything you read everywhere else does not matter. This fight will come down to who imposes their will. Do not buy into Nuragomedov having a much improved stand up because if he was focused on that during training camp, he has already lost.

McGregor does not participate in fights without knowing how to cut to the core of his opponents. DO not concern yourself with the ground game of McGregor. None of this shit matters. This fight comes down to the stage and movement of McGregor. With the tools that we all have seen from beginning, he sends Nuragomedov packing and then truly prepares for the biggest fight of all time, and it’s against Tony Ferguson.

McGregor wins by knockout in the second round, count on it. Justindamous has spoken… 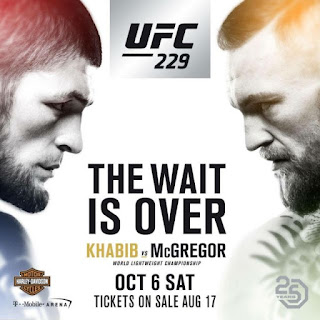