All Elite Wrestling returned to pay-per-view this evening with arguably their most anticipated event to date as All Out emanated from the Now Arena in Chicago, Illinois. The plethora of star power saturating this stacked card was undeniable with the majority of the publicity drawn to the nuclear level return to the ring of CM Punk for the first time in seven years! Including Punk’s return, the card featured nine matches with every AEW title on the line.

Miro, once known as Rusev in WWE, entered the ring tonight to defend his TNT Championship and his blemish-free 13-0 record against one of his most challenging competitors to date, the ring veteran Eddie Kingston. Kingston appeared poised to capture his first championship in AEW after he executed a perfect DDT late in the match, however, the referee was distracted by an exposed turnbuckle and didn’t commence with his count promptly enough. Moments later, Miro struck Kingston with a mule kick between the uprights as the ref was once again distracted. Miro followed this up with a stiff kick to Kingston’s head allowing him to secure the 1-2-3.

Jon Moxley sent an open contract to New Japan Pro Wrestling which was accepted by one man, the Japanese legend Satoshi Kojima. Moxley was able to overcome Kojima in a hard-hitting Japanese strong style encounter as he executed consecutive Paradigm Shifts to put him away. Following the match, the music of another Japanese legend, Minoru Suzuki, echoed through the arena throwing the already raucous crowd into a frenzy. The two men proceeded to trade blows while laughing before Suzuki delivered his signature piledriver leaving Moxley laid out in the ring.

The second title bout of the evening pit the top women’s contender, Kris Statlander, against Dr. Britt Baker who has been on the most dominant stretch of her career since taking the title from Hikaru Shida. Kris Statlander demonstrated tremendous resistance, however, she wasn’t able to execute any of her high-risk attempts which left her vulnerable in the end as the doctor executed the Pittsburgh Sunrise, a curb stomp, and the Lockjaw in succession allowing her to retain the AEW Women’s Championship via submission.

Winners: The Lucha Bros via pinfall

With the Young Bucks being the benefactors of constant outside interference in their matches as of late, this match evolved into one that would be contested in a steel cage. These teams left absolutely nothing in the ring in this contest. After Penta was unable to seal the deal with an Avalanche Canadian Destroyer, his brother pulled off the most death-defying move of the match just moments later. Rey Fenix scaled to the top of the cage and dove off taking out the Young Bucks. The Lucha Bros then executed a spike package piledriver to put an exclamation point on earning their first AEW Tag Team Championship.

The winner of the 21-woman Casino Battle Royale would earn a future AEW Women’s Title opportunity. The women would enter in four groups of five with the “Joker” being the last entrant.

The final four combatants in the battle royale were Tay Conti, Ruby Soho, Thunder Rosa, and Nyla Rose.  The first elimination saw Tay Conti launched from the ring apron by The Native Beast. Next, Thunder Rosa delivered a brutal dropkick to Nyla Rose that also dropped her to the arena floor leaving Thunder Rosa and the debuting Ruby Soho as the final two competitors. Ruby Soho and Thunder Rosa found themselves battling on the ring apron in the final moments as Soho (formerly known as Ruby Riott in WWE) delivered a kick to the head of Thunder Rosa that made her lose her footing and fall to the floor crowning Soho the winner and the recipient of a future title shot.

After Jericho conquered the first four labors of Jericho, he lost his match to MJF in the fifth and final labor via submission. Jericho demanded one final match against MJF and in order to get it, he put his in-ring career on the line. Late in the contest, Wardlow made his way to ringside only to be intercepted by Jake Hager. As referee Aubrey Edwards was distracted, MJF grabbed Jericho’s baseball bat, Floyd, and struck him. MJF then hit Jericho’s own move The Judas Effect and covered him for a three count, however, Jericho’s foot was on the rope. Referee Paul Turner made his way to ringside and alerted Aubrey Edwards to what occurred leading her to restart the match. Jericho proceeded to cinch in The Walls of Jericho prompting MJF to tap out, hence, saving his career.

CM Punk made his triumphant return to professional wrestling just a few weeks ago on the second ever episode of AEW Rampage and immediately challenged Darby Allin to be the man he would go toe to toe with in his in-ring return. The biggest question with this match would be the level of ring rust for Punk in his first match in seven years. Punk returned in shape and quickly engaged in a technical match as he attempted to slow down the high flying Allin. Late in the match, CM Punk appeared to be in dire straits after Allin unleashed his aerial assault - most notably a Swanton delivered to Punk who stood on the arena floor. In the closing moments, Allin scaled to the top rope for the Coffin Drop only to have Punk sit up at the last second. Punk then quickly answered with the Go To Sleep to secure the victory.

In another massive return to the ring, Paul Wight (better known as The Giant in WCW and The Big Show in WWE) would square off with the leader of The Factory, QT Marshall. Paul made quick work of Freehold, New Jersey’s QT Marshall as he put him down with a choke slam for his first AEW victory.

Christian Cage faced Kenny Omega for the second time in a month this evening and again it was for a world title. The last time they squared off was on the debut episode of Rampage where Cage captured one of Omega’s titles, the Impact Wrestling Heavyweight Championship. Christian gave Kenny Omega all he could handle but in the end Cage’s top rope Killswitch attempt was thwarted by Don Callis’ interference. This distraction was all Omega needed to hit the One Winged Angel from the top turnbuckle in order to put away Christian Cage and retain his title.

The events following the conclusion of the main event may have constituted one of the greatest endings to a pay-per-view I’ve ever witnessed. First, The Elite joined Omega in the ring and commenced in a vicious beat down of Christian Cage. Jurassic Express attempted to rescue their ally only to be overwhelmed by the number’s game. As Omega celebrated with The Elite in the ring, he proclaimed essentially that he couldn’t be beaten for his title. Omega was then interrupted as the lights went out. When they again illuminated the arena, the crowd erupted at the appearance of Adam Cole! Cole made his way to the ring and instead of confronting the world champion, he delivered a super kick to the jaw of Jungle Boy and embraced The Elite. Kenny Omega once again grabbed the mic and was about to bid the crowd a good night as he was interrupted yet again. This time a new rendition of a very familiar entrance theme reverberated throughout the Now Arena. All in attendance engaged in a deafening roar as Brian Danielson (most recently known as Daniel Bryan in WWE) emerged from the entrance tunnel and made his way to the ring to echoing “Yes!!!” chants. Danielson joined Christian and Jurassic Express as they cleared the ring of The Elite to close the show. 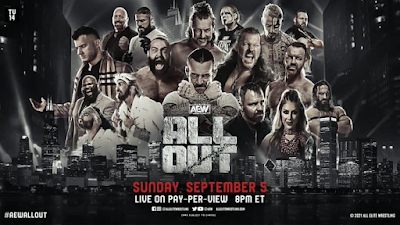