A strong sense of familiarity lurked throughout the 2300 Arena in South Philadelphia on Friday night. Homespun, perhaps is the better way to describe the event, with the locals, on the road supporters, the fight families and of course the boxers themselves in the building. The aura projected was one that was absent since before the pandemic, but one other absence was also restored. On that topic of what hasn't been present, The Weigh-In is here to discuss a certain South Philly pugilist that had been away from the ring for roughly 31 months.

Coming off both a two year layoff and his first professional defeat, while dealing with the hardships of the pandemic that delayed a lot of fights, including in the bantamweight division, Christian Carto's anticipation for that next fight never went away. One of the most talked about prospects to enter the venue, it was safe to say Carto's bout would be under high speculation from the fans, press and overall boxing scene. Describing how his performance against the Columbian fighter Yeison Vargas played out from a fan and writer's perspective was simply extraordinary.

From the sound of the bell, it was clear Carto's will, or perhaps his drive had a flare that seemed almost "new," despite having a reputation of being both a talented and stark boxer. This contest was not decided by judges in this six round bout, but dictated by Carto's jab, generalship and combination punching. To say the Philadelphia fighter was able to do whatever he wanted in that ring, as if it was his second house, would be an understatement.

Punches that Vargas could not endure, even with his guard, caused him to turn his back and fall towards the ropes, resulting in a knockdown. The following pursuit by Carto, as his opponent got up, would be a devastating body shot, a left hook to the liver. This famous punch put Vargas on the canvas for a second and final time, as the official in the ring, Eric Dali, counted the downed boxer out, leaving Carto the winner at 2:53 of this very first round.

While a victory for any boxer normally goes to show how much time, effort and overall work was put in training, Team Carto, with newly recruited trainer Bozy Ennis proved to have made the most of their preparation for the first fight together. Though this may be the return of Christian Carto, it certainly felt like he never left the squared circle. 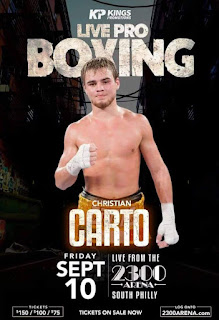