Boxer Who Defeated Ali to Sign Autographs this Saturday

By Matt Ward
Larry Holmes will be on hand this Saturday, March 13th from 1 PM to 4 PM to sign autographs at Carl's Cards and Collectibles in Havertown.

HAVERTOWN, PA — This Saturday, March 13th from 1 PM to 4 PM, former World Heavyweight boxing champion Larry Holmes will make his autograph signing debut at Carl's Cards and Collectibles in Havertown. Autographs are $49 for flats up to 16x20 and $69 for premium items (i.e. gloves, trunks, and larger flats). Inscriptions cost an additional $15 for short inscriptions and $25 for longer inscriptions.

“As a local living legend from the Lehigh Valley and an International Boxing Hall of Famer, we thought Larry would be the perfect autograph guest. Larry not only had one of the best left jabs in boxing history, but was also one of only five men to defeat Muhammad Ali,” said Lauren Henderson the PR and Marketing Director of Carl’s Cards and Collectibles.

Holmes' professional boxing career spanned four decades, compiling an impressive record of 69 wins (44 by way of knockout) and six losses between 1973 and 2002. His legendary career included victories over a "who's who" list of boxing superstars in the heavyweight division. Holmes’ 1980 victory over Ali was the only time the boxing legend was stopped in a professional fight. This fight ended when Ali's trainer Angelo Dundee, having seen enough of the one-sided affair, stopped the fight after the tenth round.

Considered by boxing analysts and insiders as one of the all-time greatest heavyweight boxers, "The Easton Assassin" was inducted into the International Boxing Hall of Fame in Canastota, New York in 2008.

When asked what Larry Holmes means to her as a sports fan, Lauren Henderson told Patch, “Larry has so many amazing boxing accomplishments, from winning his first 48 bouts to being inducted into both the International Boxing Hall of Fame and World Boxing Hall of Fame; but when I think of Larry Holmes I think of all of the great things he’s done for his community in the Lehigh Valley and specifically Easton.”

Following his long boxing career, Holmes invested his winnings from the ring in the Lehigh Valley by starting businesses in the region that employed hundreds of people. He is so beloved in his hometown that a statue was erected in 2015 to honor him.

Henderson told Patch, “He’s more than just an athlete. When I think of Larry, I think of a great community representative of our area.”

Due to COVID-19 restrictions, selfies and photos with Larry Holmes will not be allowed. All customers are required to wear masks inside of the store. 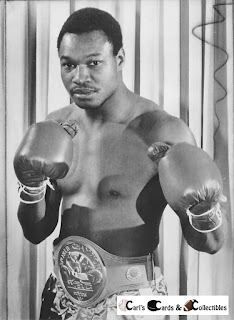