All Elite Wrestling returned to pay per view this evening with a star studded show from a sold out (or as sold out as they were permitted) Daily’s Place in Jacksonville, Florida. I can safely say that I haven’t watched a pay per view from this company that I haven’t enjoyed and this one was poised to continue this trend. Some of the most anticipated matches headed into this event included the icon Sting’s return to the ring, as well as, one of the most notoriously violent matches in the history of pro wrestling - an exploding barbed wire deathmatch - for the AEW World Title.

The Buy-In Pre-Show
Dr. Britt Baker D.M.D. w/ Rebel & Maki Itoh vs. Thunder Rosa & Riho
Winners: Dr. Britt Baker D.M.D & Maki Itoh via pinfall
The Buy-In certainly amped up the crowd by featuring some of the most talented women in AEW. This highly entertaining bout came to an abrupt end as Rebel cracked Thunder Rosa over the head with a crutch while referee Paul Turner was distracted allowing Dr. Baker to roll her up for the pinfall.
Main Card
AEW Tag Team Championship
Chris Jericho & MJF w/ Wardlow vs. The Young Bucks (c)
Winners: The Young Bucks via pinfall
The main portion of the card wasted no time getting off the ground as “Le Champion” Chris Jericho teamed with his Inner Circle cohort Maxwell Jacob Friedman to challenge The Young Bucks for the tag team titles. The ageless wonder Chris Jericho, a 30-year ring veteran, put forth a phenomenal effort, however, it wasn’t quite enough as Le Champion succumbed to the Meltzer Driver at the hands of the Young Bucks to secure the pinfall for the defending champs.
Casino Tag Team Battle Royale
Winners: Death Triangle - PAC and Rey Fenix
AEW put a unique spin on their traditional Casino Battle Royale by introducing a tag team incarnation. The rules stated a new team would enter every 90 seconds and a team would only be eliminated when both members were eliminated by being thrown over the top rope. If that weren’t enough, the winners would earn a shot at the AEW tag team titles. The competitors (in their order of entry) included The Natural Nightmares, Dark Order members 5 and 10, Santana and Ortiz, Matt and Mike Sydal, Dark Order’s Evil Uno and Stu Grayson, The Gunn Club, “Pretty” Peter Avalon and Cezar Bononi, The Varsity Blondes (Brian Pillman Jr. and Griff Garrison), Bear Country, Jurassic Express (Jungle Boy and Luchasaurus), Butcher and the Blade, Private Party, SCU (“The Fallen Angel” Christopher Daniels and Frankie Kazarian), Death Triangle’s PAC and Rey Fenix, and Dark Order’s John Silver and Alex Reynolds. The final four in the ring were John Silver, “Jungle Boy” Jack Perry, PAC, and Rey Fenix - leaving the Death Triangle members as the only intact team remaining. Jon Silver was the first eliminated by Fenix who walked the ropes and delivered a kick to his jaw as he hung on for dear life from the ring apron. PAC was the next to go as Jungle Boy ducked and pulled down the top rope down allowing the charging PAC’s momentum to propel him from the ring. Finally, in a blazing fury of action, Jungle Boy’s momentum was halted by a stiff kick in the face that allowed Fenix to clothesline him over the top rope to earn the victory. 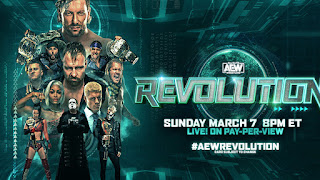