The month eight pay per view of the Quarantine Era emanated from the Thunderdome in Orlando, Florida as WWE presented the 34th annual Survivor Series. This evening’s card was labeled “Best of the Best” as each contest pit RAW against Smackdown meaning there were several champion versus champion matches with nothing at stake. The most significant event of the evening, however, was the “Final Farewell” of The Undertaker after 30 years with the company. Personally, I think it’s a metaphorical slap in the face to the Deadman to commemorate the legendary career, of arguably the most loyal performer who is largely responsible for keeping WWE alive during the Monday Night Wars, in front of the dystopian virtual WWE Universe instead of in a sold out arena.

The first elimination of the match came in bizarre fashion as Rollins “sacrificed” himself to a Brogue Kick from Sheamus leading to his pinfall. Team RAW continued their momentum as a series of Stunners delivered by Kevin Owens was abruptly halted by AJ Styles with a Phenomenal Forearm followed by a pinfall. Just when you thought it couldn’t get any worse for Team Smackdown, King Corbin fell victim to a moonsault delivered from the top turnbuckle by Matt Riddle for the third consecutive elimination of a member of the Blue Brand team. Otis then gave Strowman a run for his money but it wasn’t enough as The Monster Among Men hoisted him up before he could propel himself from the top turnbuckle and delivered a ring shaking power slam leaving Jey Uso alone. Jey Uso under the impression that Styles was the legal man had not seen the blind tag made by Keith Lee. As Uso dove off the top rope with Styles in his crosshairs, Lee intercepted Jey by catching him on his shoulders and proceeded to break him in half with a Spirit Bomb to solidify a clean sweep for Team RAW.

Winners: The Street Profits via pinfall

The second bout of the main card pit the Smackdown Tag Team Champions, The Street Profits, against the RAW Tag Team Champions, The New Day. If I’m being honest, the most entertaining aspect of this match was when it dragged on way too long and it became apparent that fake crowd noise was being filtered in as the audible reaction did not match that of the demeanor of the virtual fans. The conclusion to this clash commenced as the Street Profits executed a Blockbuster on Xavier Woods which allowed Angelo Dawkins to seal the victory for his team with the pinfall.

The third contest of the evening saw the United States Champion, Bobby Lashley, square off with the Intercontinental Champion, Sami Zayn, in yet another non-title contest. The majority of this match was comprised of Zayn complaining to the referee about The Hurt Business at ringside in between spurts of Lashley absolutely dominating the Intercontinental Champion. Lashley finally trapped the constantly fleeing Zayn in The Hurt Lock for the submission victory.

The struggle for brand supremacy continued as the RAW Women’s Champion, Asuka, battled the Smackdown Women’s Champion, Sasha Banks. The primary question posed by this match would be if Banks could finally conquer the Empress of Tomorrow - a woman she had never pinned or submitted dating back to their days in NXT. In a match riddled with a plethora of knee strikes and submission attempts by each competitor, the conclusion arrived after a flurry of pinfall attempts by each woman which ended in Banks finally rolling up Asuka for the victory.

The first elimination of the match finally arrived as Peyton Royce hit the Déjà Vu on Bayley for a rather shocking pinfall. Next, Natalya promptly evened the odds as she cinched in the Sharpshooter on Royce for the submission elimination. Natalya then became distracted by Baszler which allowed Lacey Evans to hit the Woman’s Right on Neidhart for yet another elimination. Shayna Baszler next tied up Ruby Riott with the Kirifuda Clutch during which she passed out allowing The Queen of Spades to pin her. Another quick elimination evolved as Liv Morgan quickly pinned Lacey Evans with a Crucifix rollup. Morgan, unable to carry any momentum moving forward, was no match for Nia Jax who then entered the bout and quickly laid waste to Liv with a Samoan Drop. Belair, now on her own, was quickly trapped by Baszler in yet another Kirifuda Clutch. Belair proceeded to carry Shayna on her back to the ropes to prompt a break. Baszler refused to break the hold by the referee’s five count hence leading to her swift disqualification. Following Baszler’s dismissal from the match, Nia Jax and Belair proceeded to brawl outside the ring and ended up being counted out so Lana, who had been banished by Jax and Baszler to stand on the ring steps and not participate in the match, ended up as the sole survivor.

Drew McIntyre shocked the WWE Universe this past Monday on RAW when he defeated Randy Orton to regain the WWE Championship he just lost last month at the Hell In A Cell pay per view. This set the stage for the main event of the evening as WWE Champion, Drew McIntyre, went toe to toe with the Universal Champion, Roman Reigns. Reigns appeared to be in dire straits late in the bout as he was met with a Claymore Kick when attempting another spear, however, he was propelled into the referee who was knocked out of the ring. Roman’s cousin Jey Uso then made his way to ringside causing enough of a distraction for Roman to hit McIntyre with a low blow. Reigns then cinched in a guillotine choke that knocked out the WWE Champion and solidified the submission victory.

The show concluded with the final farewell to the Undertaker. Before the Deadman made his way to the ring, several legends were introduced including Ric Flair, Kevin Nash, Shawn Michaels, Kane, Triple H, Rikishi, The Godfather, Savio Vega, Mick Foley, and The Godwinns, in addition to a few words offered by Vince McMahon. The Undertaker spoke briefly, said it was time for “The Undertaker to rest in peace” and slowly exited the arena. In my opinion it was rather anticlimactic and, while he made his debut at Survivor Series, one could say a more fitting farewell would have been in front of a record-setting crowd at Wrestlemania - the event that made him famous with the streak. With that being said, one can never say never in the world of professional wrestling. 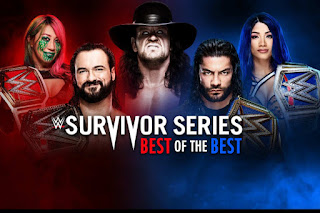