Arizona boxing fans received an early Christmas gift this evening as Matchroom Boxing presented a stacked card to close out the year from the Talking Stick Resort Arena in Phoenix broadcasted live on DAZN. This event, originally scheduled to be held in Las Vegas, was moved to Phoenix after Julio Cesar Chavez Jr. refused to submit to a random drug test in October, hence awarding him an indefinite suspension from boxing in Nevada. In addition to Jacobs vs. Chavez Jr., there were several other compelling fights that saw Maurice Hooker, Liam Smith, and Gabriel Rosado among many others in action for what proved to be an evening of season’s beatings.

This was starting to become a rather entertaining fight after the first few rounds as the referee called a stop to the action on the advice of the ringside physician shortly after the opening bell of round five as a result of damage Sanchez suffered to his left eye. The win allowed “Kazakh Thunder” to remain undefeated in what appeared to be a fight he was arguably down on the cards in early on. Whether this was a testament to Yeleussinov’s power and precision or just luck is yet to be seen as Sanchez was the more active fighter and continued to move forward throughout the fight.

In round one, Kelly dropped to the canvas after what the referee ruled to be a strike to the back of the head and subsequent slip. This seemingly got to Kelly as he proceeded to drop his hands quite frequently for the next few rounds in a taunting fashion. These rounds also became quite “chippy” as the two needed to be separated by the ref multiple times for headlocks and other nonsense.

The late rounds saw Josh Kelly settle in and display more of what one would expect from a former Olympian as he showed more poise as he landed with great precision and finally scored a knockdown early in round 10 with a stiff right to the body. While Campos displayed a solid chin and went the distance, he was not able to mount much offense as Kelly demonstrated superior speed and head movement that left him mostly unscathed.

In rounds one through three, both fighters appeared very evenly matched as neither gained much of an advantage and a case could be made for each on the scorecards. In round four, Liam Smith took control and continuously walked down Garcia as he relentlessly worked the body to the point Garcia began to lean on him to seemingly catch a breather.

Garcia’s tactics must have worked as he entered round five with new vigor and had Smith’s back to the ropes for the duration of the round. Garcia walked back to his corner after the round showing no respect for his opponent as he kicked his feet towards him as if to mimic brushing dirt in his face. Following an evenly contested round six, Smith found himself on the ropes to open round seven. Garcia was unable to maintain the pressure, however, as Smith turned the tables and did some of his most effective work of the fight to that point as he went back to work on the body of Garcia. Unable to build momentum following round seven, the closing rounds were again rather evenly contested until the closing moments of round ten when Smith left a lasting impression on the judges with an overwhelming flurry. The close rounds clearly went to Smith as he won very decisively on the scorecards.

Well this one did not last long… Staten Island’s “Albanian Bear” Reshat Mati, a 2018 National Gold Gloves champion, made quick work of Rakim Johnson. Following a brutal liver shot that dropped Johnson to the canvas early in the round, Mati scored THREE more knockdowns before the referee had seen enough and mercifully called a stop to the action.

Following a setback TKO loss in July to Jose Carlos Ramirez, Maurice Hooker sought to get back on track this evening against Uriel Perez – also fighting for the third time in 2019 riding a two fight unbeaten streak. In another short affair, Hooker kept Perez at bay with the jab and in a rousing turn of events, landed a stiff right to the body of Perez followed by a vicious barrage to the head that dropped him to his knee. After a brief conversation with the referee, the “action” was abruptly ended – looks like Hooker’s redemption was a success.

In one of the swing bouts of the evening, Tucson, Arizona’s Francisco Muro squared off with Camden, New Jersey’s Raymond “Savage” Ford – a 2018 National Golden Gloves champion. It should also be noted that the undefeated Ford walked to the ring in full Christmas mode donning Santa Claus attire. From the opening bell, Ford was a man possessed as he unleashed a vicious assault of devastating combos on Muro leading first to a quick knockdown, then to a stoppage after he had no answer for Ford.

Former Flyweight champion Cristofer Rosales went toe-to-toe with fast rising contender Julio Cesar Martinez Aguilar for the vacant WBC Flyweight Championship in the co-main event of the evening. Round one was a blur of flying fists – much as is the case with flyweights – where Martinez seemed to carry a slight edge in pushing the action. Round two proved more of the same as Martinez continued to press Rosales although it was clear that Martinez was hurt by a stiff right to the face from Rosales that stifled one of the pugilists flurries.

Both fighters settled in during round four and it was apparent that they were landing with sniper-like precision as Martinez left the round with a cut under his right eye while Rosales had a stream of crimson flowing from his nose. In rounds five through seven we witnessed Martinez dig in and go to work on Rosales as he cut off the ring regularly and forced Rosales to become a counter-puncher.

In round nine, Martinez again cut off the ring and had Rosales pinned against the ropes where he proceeded to mercilessly measure him up with a bevy of straight rights and left hooks until the referee had seen enough and called a stop to the action in what was a very entertaining co-feature.

In the main event of the evening, Daniel “Miracle Man” Jacobs made the move up to 168 pounds riding the heels of his unanimous decision loss to Canelo Alvarez back in May losing his IBF Middleweight Title in the process. Jacobs was opposed by Julio Cesar Chavez Jr., a veteran of 55 professional bouts despite being only 33 years old. Chavez Jr. enters this fight a winner of three out of his previous four contests – most recently in August when he knocked out Evert Bravo. It should be noted that prior to his August encounter, Chavez Jr. had not fought since May 2017 when he dropped a unanimous decision also to Canelo Alvarez.

There were several storylines associated with this fight (aside from the reason it was moved to Phoenix as I mentioned earlier) such as: How would Daniel Jacobs fair at 168 lbs? Would Julio Cesar Chavez Jr. rise to the challenge and earn what one could consider a signature win against a top tier competitor in more than seven years? Lastly, would Chavez Jr. coming in over the weight limit play a role in the outcome of the fight?

In round one, Chavez Jr. came out as the aggressor while Jacobs displayed patience in getting a feel for his opponent creating distance with the jab until he was able to land some well placed shots in the closing seconds. Round two saw Chavez Jr. continue to push the action while displaying effective head movement in avoiding some of Jacobs’ offense – clearly Chavez Jr.’s trainer Freddie Roach had a plan entering this encounter.  After a similar narrative in round three, round four elevated the intensity level to new heights as the fighters engaged in close quarter combat until the round ended with an exchange that brought the entire arena to it’s feet.

After another exciting round, round five concluded with Chavez Jr. bloodied in his corner. Before round six got under way, Chavez Jr.’s corner stated he was unable to continue ruling an end to the fight. After the ruling, the arena erupted as they showered the ring with boos and booze and cups of beer and other debris were propelled at the ring leaving no one – not even the media spared. Stay classy Phoenix…

Also of significant note, this marked the third fight I’ve attended that has ended in some sort of riot-like situation – the others being the riot at the LA Sports Arena following Amir Khan’s victory over Carlos Molina and Canelo Alvarez’ controversial stoppage over Alfredo Angulo in Las Vegas. That’s gotta be some sort of record, right?

This fight started roughly 45 minutes after the conclusion of the main event sadly in front of an empty arena – the spectators composed mainly of Matchroom Boxing crew, arena staff, and the few members of the media who remained.

King Gabriel Rosado came out with a chip on his shoulder in round one – deservedly so after waiting all day to fight when he should have had a spot on the main card – and let his fists fly. Rosado was added to the card as a contingency in the event Chavez Jr. didn’t make weight, which he didn’t, but the bout was saved after he paid a $1 million penalty. Since Rosado was not needed to step in against Jacobs (which arguably would have been a much more entertaining matchup), he squared off with Humberto Gutierrez Ochoa who proved to be a more than worthy adversary as he put in a gritty performance albeit without mounting much offense. Rosado on the other hand put on a 10-round clinic where he punished his opponent on his way to a unanimous decision victory. 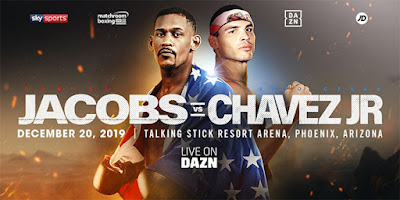