In the opening frame, Robinson moved in and connected with a hard right hand to McGregor's face, a shot that snapped his head back. In the third round, McGregor effectively applied pressure to Robinson. McGregor controlled much of the tempo of the fourth round. He knocked Robinson into the neutral corner with a big left hand as the round approached its end.

This was a sloppy fight through the first five rounds. The crowd rose to their feet in the sixth round, as Robinson connected with a series of straight right and left hands to McGregor's head and body. As the sixth round approached its end, the two fighters had a good exchange near the blue corner. Throughout the eighth and final round, the two fighters swung wildly and wrapped one another up to avoid any unnecessary damage. All three judges scored the bout for the winner by unanimous decision Brandon Robinson. The judges scorecards read 77-75 twice and 78-74.

Australian bombshell, Avril Mathie (4-0-1, 2 KOs), remained undefeated with a unanimous decision victory over Karen Dulin (3-22-1, 1 KO). The  swimsuit model turned bantamweight boxer, Mathie, established her jab in the opening frame and outpointed the veteran Dulin. In the third round, Mathie control the tempo of the fight by landing a series of hooks to the head and body of Dulin. After four rounds of action, all three judges scored the bout 40-36 for the winner by unanimous decision, Avril Mathie.

In what was a highly entertaining fight before it was stopped in the third of six scheduled rounds, Trenton's Shinard Bunch (3-1, 3 KOs) fought Philadelphia's Vinny Floyd (4-8-1, 2 KOs) in a welterweight contest. A Bunch right to the body and left to the chin knocked Floyd down in the first round. Bunch had Floyd on shaky legs after the knockdown, but failed to put pressure on his taller opponent to secure the knockout. In the second round, Floyd was knocked back into the ropes with a multi-punch combo that was highlighted by a right hand to the head as time expired. The referee ruled this a knockdown.

In the third round, the fight was stopped due to a cut on Floyd's scalp, that was opened up due to an accidental headbutt. Because the fight did not reach the fourth round, it was ruled a no-contest. The two men will  fight again on December 6th when King's Promotions returns to the 2300 arena.

Allen Returns to his Winning Ways in Front of Hometown Crowd

Damon Allen (16-1-1, 5 KOs) bounced back from his first career loss last August with a victory over Dieumerci Nzau (11-10, 8 KOs). Allen answered the opening bell by controlling the tempo of the fight and landing shots at will. He rattled Nzau with a big left hand to the head in the first round. Nzau swung wildly and ineffectively at his opponent in the second, clearly frustrated by Allen's poise and fight plan.

Allen punished Nzau with repeated left hands to the head in the third round. In the fourth round, the sound of two of Allen's left hands connecting with Nzau's head echoed through the arena.

A left hand to the head shook Nzau in the sixth round. Both fighters looked exhausted later in the sixth and final round. The last-minute was filled with instances of both men hanging all over one another. To the delight of the pro-Allen crowd, all three judges scored the bout 60-54 in favor of the local fan-favorite.

The former Pennsylvania Lightweight champion, Naim Nelson (14-4, 1 KO), halted his three fight losing streak with a unanimous decision victory over Harrisburg's Roy McGill (6-4, 3 KOs). The junior welterweight contest was evenly matched through the first two rounds. Miguel put his foot on the gas in the opening seconds of the third round, and then the action seemed to settle down. The two men spent the last three rounds chasing each other around the ring to the displeasure of the crowd. The judges scored the bout 58-56, 59-55, and 60-54, all in favor of Nelson.

Chestnut Hill's Ryan Umberger (3-0, 3 KOs) increased his knockout streak to three with a victory over Camden's Leon DeShields (0-7). An Umberger right hook to the body sent DeShields to the canvas in the opening seconds of the first round in this junior middleweight bout. DeShields recovered from the knockdown only to be finished off later in the round at 2:49, when Umberger nailed him with a overhand right to the head.

Rivera Wins by Second Round TKO

Cruiserweights Angel Rivera (5-1, 4 KOs) and Nicoy Clarke (2-5) squared off in a fight that was scheduled for four rounds. The opening round was filled with lots of action. Clarke tried to trap Rivera in the first round, but Rivera kept punching his way out of these traps. Rivera finished off Clark in the second round with an uppercut followed by left and right hooks to the head and body. Clark crashed to the canvas and referee Erik Dali waved off the fight at the 1:41 mark of the second round.

Martin, Down in One, Recovers for Win

James Martin (5-1) defeated Juan Rodriguez (8-16-1, 6 KOs) by unanimous decision in the opening bout of the evening. A Rodriguez body shot in the opening round caused Martin to take a knee. Later in the first round, Martin appeared to hurt Rodriguez on two occasions, but failed to press the attack and secure a knockdown. A right hand from Martin in the second sent Rodriguez tumbling back into the corner. Rodriguez wrapped Martin up to kill the multi-punch onslaught.

Rodriguez showed his ring experience in the third round by smothering multiple attacks by Martin. There was a big exchange of shots in the center of the ring to start the fourth round. Unfortunately, this early action in the round would be negated by excessive holding throughout the last two minutes of the final round. The judges scored the bout 38-37 and 39-37 twice for Martin. 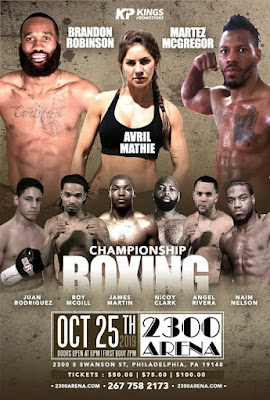