The 32nd installment of WWE’s biggest party of the summer, Summerslam, emanated from the home of the NBA World Champion Toronto Raptors, the Scotiabank Arena. With less than two weeks before AEW presents ALL OUT, their last major pay per view before they premier on TNT in October, and with the upcoming premier of Smackdown on FOX, one was left to wonder if WWE would take this opportunity to push the envelope further with what they’ve labeled as a move to “edgier” programming. The card certainly had no shortage of star power as it featured Brock Lesnar, as well as, ring legends Trish Stratus and Goldberg - both in competition. The nine match card also treated fans to four title bouts headlined by Brock Lesnar pitted against Seth Rollins for the Universal Championship.

Canada’s own Natalya Neidhart challenged “The Man” for her Women’s Championship as the two proficient submission experts squared off in a submission match to kick off the main card. After a very evenly contested bout, it appeared Natalya would finally earn championship gold again as she cinched in a picture perfect Sharpshooter, however, The Man was able to avert disaster and turned the tables as she locked in The Disarmer for the submission victory.

For several weeks Dolph Ziggler had belittled several WWE legends, most notably Shawn Michaels. At the contract signing this past Monday, Ziggler under the belief that he was signing up to fight The Miz, neglected to read the fine print and found himself obligated to face the legendary Goldberg much to the chagrin of the WWE Universe. It appeared for a brief moment that Dolph would pull off an unbelievable upset as he hit the super kick immediately after the opening bell. With Goldberg laid out, Dolph stood poised to land another super kick, however, Goldberg returned to his feet and intercepted Ziggler with a body-breaking spear. Goldberg immediately followed up with the Jackhammer as he made quick work of Ziggler.

Now reunited with his old Bullet Club cohorts, Gallows and Anderson, A.J. Styles defended his United States title this evening-one which he captured from Ricochet last month. Ricochet earned this opportunity after he prevailed in a gauntlet match recently on RAW. In the final moments of the contest, Ricochet vaulted off of the top rope only to be caught by the Phenomenal One who put him away with the Styles Clash for the victory.

Ember Moon controlled the tempo of this entire match with her striking ability, however, Bayley picked her shot as she intercepted Ember Moon on the top rope and executed the Bayley to Belly to put the final stamp on her title defense.

KO seemingly had the victory sealed as he executed a senton and frog splash back to back only to have the special guest enforcer Elias disrupt the referee’s 3-count. After Elias was disposed of, KO proceeded to kick Shane-o-mac between the uprights and finished him off with a stunner for the victory and to ensure he kept his job.

Stratus entered this match looking as phenomenal as ever and immediately took the fight to Charlotte. This didn’t last long as the Queen quickly assumed control and controlled the tempo for a majority of the match as she mocked the WWE Hall of Famer at every opportunity. Trish attempted a late rally as she landed the Stratusfaction and the Chick Kick but they were not enough to put Flair away. In the end, Charlotte trapped Trish in the Figure Eight for the submission victory. Needless to say, this match did not leave this writer stratusfied.

This bout was ten years in the making as Kofi accused Randy Orton of holding him back with his backstage influence back in 2009 - apparently this was the best buildup that the writing team  could come up with for a Summerslam championship match. One of the most entertaining aspects of this match didn’t come from one of the performers but rather the crowd as they repeatedly engaged in the chant, “Kofi’s stupid, Randy sucks!” In the closing moments of the match, the most spectacular moment of the contest was spoiled as Kofi leapt off the top rope and got caught with an RKO Outta Nowhere only to roll out of the ring and avoid a potential pinfall. Orton proceeded to follow Kofi out of the ring where he laid in front of his family at ringside. As Orton attempted to embarrass Kofi, the two men were counted out, however, this was not the end as Kofi proceeded to lay waste to the Viper with a kendo stick as he took exception to his actions.

Finn Balor vs. “The Fiend” Bray Wyatt
Winner: The Fiend via pinfall

This evening marked the in-ring debut of Bray Wyatt’s new persona The Fiend. With the exception of some brief offense displayed by Finn late in the contest, this was the definition of a squash match. Finn was finally put out of his misery as Bray shoved his fingers down his throat with a Mandible Claw pinning Balor’s shoulders in the process for the victory.

This was by far the longest, most competitive match these two men have ever had. The action was fast and furious as each continued to execute their signature moves throughout the match to no avail. The closing moments saw Rollins drop Lesnar to the canvas with a super kick which he immediately followed with a curb stomp as a new Universal Champion was crowned in what may have been Lesnar‘s shortest title reign to date. 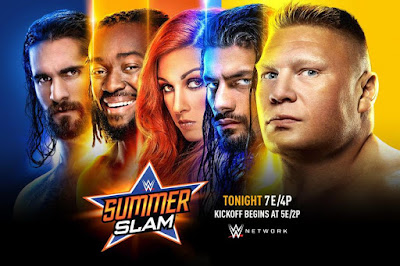