New Jersey fight fans will not have to travel far to watch their home grown pugilists this summer as three scheduled fight cards in “The Garden State” will feature homegrown talent.  Leading the parade, 2016 Olympic Silver Medalist Shakur Stevenson headlined a well-attended Top Rank promoted show at the Prudential Center in Newark.

The city of Newark has nothing but love for Stevenson and loudly cheered the 2016 Olympic silver medalist's entrance into the arena. Pumped up for his homecoming celebration, Stevenson,126 lbs, punched the air out of Alberto Guervara, 125.4 lbs of Mazatlan, Mexico, stopping him at 2:37 of the third round. Excited about his homecoming celebration,  southpaw Stevenson started fast dropping Guervar twice during the second before ending it in the next stanza with a double right hook and straight left to Guervara's head.  Stevenson, 12-0 (7 Ko’s), called for a fight with IBF Featherweight champ Josh Warrington afterwards. Guervara returns south of the border with a 27-4 (12 Ko’s) record.

A bunch of North Jersey ticket sellers were on the undercard . Most prominently seventeen-year-old welterweight Vito Mielnicki, 146 lbs., of Roseland, NJ made his pro debut dispatching Tamarcus Smith, 139 lbs, of Meridian, MS in the first round. Mielnicki has a powerful build for a boxer his age and very quick hands. Press agent Marc Abrams indicated the very popular Mielncki sold over a thousand tickets. Mielnicki starts his senior year at West Essex High School this fall. Smith is now 2-3 (2 Ko’s). 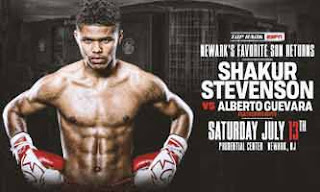 Atlantic City boxing savior LaManna Family’s Rising Star Promotions are staging two shows two weeks apart at The Showboat Hotel. On Saturday July 20th, world rated Thomas LaManna headlines the night in a ten rounder. Two other local fan favorites, super welterweight Isiah Seldon and super middleweight Gabriel Pham support the card. LaManna was in negotiations to face former welterweight king Kell Brook on the undercard of Joshua vs Ruiz at Madison Square Garden in June, but Brook would not accept him as an opponent. A rumor circulated that LaManna was in line to challenge WBO Super Welterweight Champ Jamis Munguia for his crown.

On August 3, Rising Star Promotions returns to the ShowBoat Hotel to host the return of the South Jersey bantamweight prospect  Christain Carto. Carto was considered the areas hottest prospect and promoters from around the globe wanted to ink him. Carto won his first seventeen fights, eleven by kayo. One punch from Mexican journeyman Victor Ruiz changed that. Ruiz caught Carto with a shot to the chin that had him knocked out cold before he hit the canvas. The effect of the blow left Carto motionless on the canvas until he was placed on a stretcher and taken to the hospital. An opponent has yet to be named for Carto. In the co-feature, super middleweight Derrick Webster, will make his come back from a one sided loss in Lennox Allen.

LaManna, Carto, and Webster are big draws and both of these shows will undoubtedly sell out. 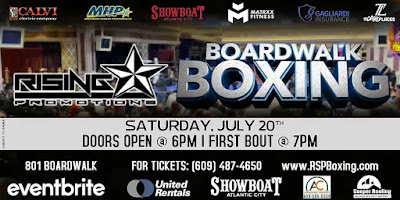