The pugilists of Iron Boy Promotions make their return to Phoenix, Arizona this Saturday evening as the storied Celebrity Theatre plays host to Iron Boy 52. Iron Boy is poised again to satiate the thirst of Phoenix fight fans for top tier sanctioned savagery as they are prepared again to showcase the finest up and coming professional fighters coupled with some grizzled veterans of the squared circle.

The co-main event will pit 21-year old Jesus Ibarra (8-0-0, 4 KOs) as he seeks to remain undefeated against Francisco Dominguez (7-10-1, 1 KO) in a six round bout that will be contested at 126 lbs. Ibarra, a resident of nearby Apache Junction, AZ, will try to continue to build momentum on the heels of his most recent victory – a unanimous decision victory over Isaac Camarillo back in April. Ibarra’s opponent, Francisco “Panchito” Dominguez, a veteran of 18 professional bouts, will seek to right the ship of his career as he is currently riding a seven-fight winless streak with his last victory coming way back in 2010 as he earned a unanimous decision or Arturo Murillo.

In the main event, budding fan favorite Trini Ochoa (6-0-0, 3 KOs) will also strive to remain undefeated in his young campaign as he battles Omar Garcia (6-8-0, 1 KO) at 140 lbs. Ochoa will already be making his third appearance of 2019 after he fought FOUR TIMES in 2018. Ochoa most recently stepped into the ring in April as he made quick work of Elliot Brown with a third round knockout. The 20-year old Ochoa’s opposition will be supplied by 35-year old Omar Garcia. Garcia who goes by the moniker Mr. Power (I must say this may be one of the best ring names I’ve ever seen as it would have perfectly suited a heel character in the 1989 Hulk Hogan classic No Holds Barred – in fact, it’s so incredible that the gentlemen of The Weigh-In may need to bestow it upon our esteemed colleague Justin Dohnson), will seek to return to the win column as he is in the midst of an intimidating six fight losing streak. Garcia last tasted victory in April of 2016 as he earned a unanimous decision over Juan Payta.

The casual fight fan may look at the seemingly mismatched records between some of these fighters and discount the result as being anything but an inevitable victory for the “A side” fighter. An assumption as such would quite frankly be foolish.  These combatants don’t continue to rigorously train to simply get in the ring and lose which is why these action-packed events always provide such a compelling dynamic. Fans not only have the opportunity to witness prospects cut their teeth on the way to potential stardom but also discover whether these young fighters have the grit to overcome some deceivingly stout competition who are not there necessarily to just “lay down” but still have their own hopes of some semblance of glory - despite a seemingly lopsided record.

Don’t deprive yourself of the opportunity to witness all of the action within the intimate confines of the Celebrity Theatre this Saturday! Tickets are still available at celebritytheatre.com starting at only $30, however, if you are not able to come out don’t fret because the fights will be live-streamed on ironboyboxing.com! 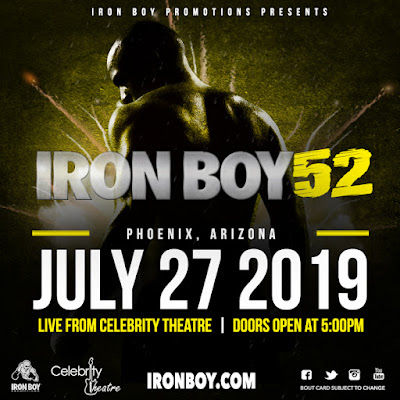