Impact Wrestling returned to The Asylum in Nashville, TN where Jeff Jarrett and his father Jerry created Total Nonstop Action Wrestling (TNA) after the demise of WCW back in 2002. Having survived through multiple ownership battles, roster overhauls, and several network changes, this pay-per-view seemed to symbolize a sort of rebirth for the company…again…as they returned to their roots and are about to embark on another new TV deal beginning this week as they move from Pop TV to the Pursuit Channel (one I wasn’t even sure if my cable provider offered until I searched for it).

The card featured eight bouts with four titles contested. My only gripe with the show was if Impact Wrestling was attempting to have a sense of nostalgia surrounding it, then where were Tommy Dreamer and Raven who laid out Eli Drake on the final Impact before the event? The only legends that appeared on the pay-per-view were Abyss and Konnan, aside from those featured in the vignettes produced to display the history of The Asylum. Nonetheless, this was still an entertaining event and I continue to be pleased with the vast improvement of the product’s announce team since the introduction of ECW and TNA stalwart Don Callis on color commentary.


Ultimate X Match for the X Division Championship
Rich Swann vs. Trey of the Rascalz vs. Ethan Page vs. Jake Crist of OVE
Winner: Rich Swann

This match came to fruition after Brian Cage utilized Option C and relinquished the X Division title in exchange for a shot at Johnny Impact’s Heavyweight Championship. It was apparent that selection of the participants in this bout was strategically designed to put Trey, Page, and Crist on a major platform with the veteran Swann carrying them through the match. Swann clearly shined in this contest and put his full arsenal of high flying acrobatics on display. In the end. Swann and Trey simultaneously scaled the Ultimate X scaffolding as Swann just beat him to the center of the ominous structure and retrieved the title to become the new champion.


After Allie “lost her soul” to Father James Mitchell at Bound for Glory when she entered the undead realm to save Kiera Hogan, she slowly displayed a much darker character over the past couple months which culminated in this contest coming to the forefront after fruitless efforts by Hogan to save her. Yung and Allie controlled the majority of this match as they prevented Grace from making any impact in this contest and in the end Hogan fell victim to the mandible claw from Allie. After the conclusion of the match, the undead bridesmaids carried out a casket for Hogan, however, when it was opened Rosemary emerged! After she laid waste to Su Yung and the bridesmaids, she encountered Allie in the ring briefly only to have Allie flee.


The feud between these former friends finally came to a head this evening. After Edwards “snapped” backstage shortly after Bound for Glory, he was “committed” to Shady Acres Mental Institution in Baltimore, Maryland. Edwards finally made his escape after he was supplied with a keycard by the one and only Raven-who told him he checks himself in once a month. The bout arrived at its conclusion as Edwards proceeded to brutalize Moose with a kendo stick late in the contest. Edwards’ wife Alisha then came down to the ring to seemingly stop him from inflicting more damage to Moose’s cranium. Instead, Alisha took the kendo stick from her husband and continued the assault. Edwards put an exclamation point on his performance as he nailed the DDT to seal the victory.


Sami Callihan withstood a stunner, a standing moonsault, and the momentum Willie Mack carried throughout the match to finally execute a devastating piledriver for the pinfall victory, with a surprisingly minimal amount of influence from Dave Crist at ringside.


Eli Drake entered this match claiming that he would put an end to hardcore wrestling by defeating The Monster Abyss. Despite being choke slammed onto a pile of thousands of tacks which left his back a bloody and metallic mess, despite being tossed out of the ring and through a table propped up on the outside, and despite the introduction of “Janice” (Abyss’ 2x4 lined with nails), Drake got the upper hand after he tossed a handful of tacks into the face of Abyss late in the contest. Drake proceeded to victimize Abyss with a plethora of chair shots before he finally broke a boat oar over his head to earn the pinfall.


LAX confronted the Lucha Bros on a recent episode of Impact boasting how they had beaten every tag team in Impact Wrestling and challenged them to a match with their titles on the line at Homecoming. This challenge was much to the behest of their manager Konnan who decided not to accompany them to the ring for the contest. The action was fast and furious throughout. Unfortunately, it seemed to end very abruptly as Fenix was the victim of a blitzkrieg as Ortiz hit him with a top rope Code Breaker, then Santana clocked him with a super kick, and finally both double teamed a dazed Fenix with a suplex that allowed Santana to earn the pinfall victory.


The feud between Valkyrie and Blanchard became so heated leading up to Homecoming that Impact Wrestling instilled Hall of Famer Gail Kim as the special guest referee. Late in the contest, Blanchard got into a verbal scuffle with Kim as she was seemingly frustrated with her inability to earn a pinfall. The war of words quickly escalated as Blanchard decided to shove Gail Kim. Kim took exception to this and caught Blanchard off guard with her finisher, Eat Defeat. Taya capitalized and followed up with the Road to Valhalla to become the new Knockouts Champion!

Brian Cage decided to implement Option C, made famous by Austin Aries, back in November as he cashed in the X Division Title for an opportunity to compete for the World Championship. Brian Cage should receive credit for putting on a very competitive match despite apparently nursing a hamstring injury (his hamstring was virtually covered in kinesio tape) which seemed to limit his typical variety of aerial maneuvers ,a man his size should not be able to execute.

After a evenly contested match, Johnny Impact attempted to end the contest as he landed Starship Pain and a top rope Spanish Fly, both of which Cage kicked out of. Then Brian Cage hit several power bombs and the Drill Claw, neither of which could put away Impact. Moments later, Cage was propelled into the barricade at ringside where two former Survivor contestants sat and proceeded to shove Cage. After Cage laid waste to one of them, he returned to the ring as the ref remained distracted and was not there to count Cage’s attempted pinfall.

The conclusion of the match arrived as Johnny Impact stood on the ring apron with Cage inside standing on the rope in an attempt to suplex him back inside. I’ll be honest, the end of this match just looked off. Cage attempted to suplex him multiple times to no avail and his final attempt saw Impact vault over the top and land on Cage in an awkward pinfall. The ref’s count even appeared as if it didn’t make it to three before Cage kicked out, but nonetheless, Johnny Impact’s music echoed through the arena before the ref made any indication of a pinfall putting an end to the contest. Cage then swiped the title from the ref and held it up in a brief protest before he dropped it in front of Impact and walked out of the arena.

After the match, Impact’s wife Taya Valkyrie joined him in the ring as the two world champs celebrated together. The two walked to the top of the exit ramp to again pose with their titles as everyone assumed the pay-per-view was over. Just then, Killer Kross emerged from the back to victimize Johnny Impact. As he was laid out at ringside, Taya tried to avenge her husband only to be hoisted up by Kross in a power bomb starting position and he proceeded to vault her into the crowd. The show ended with Kross exiting the arena, maniacal expression and all, seemingly propelling himself into the title picture. 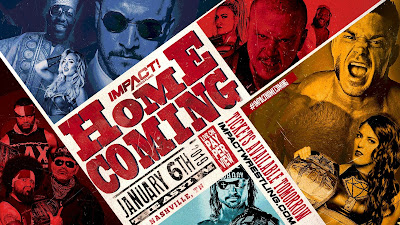