The 32nd installment of the beginning of the Road to Wrestlemania, the Royal Rumble, emanated this evening from Chase Field, home of the Arizona Diamondbacks. The crowd in attendance, that exceeded 48,000, was more than I’ve ever seen for a D-Backs game and something I took great pleasure in hearing Corey Graves point out during the broadcast. It was an intriguing set-up for the event as the ring was positioned in the vicinity of where second base would be during a baseball game and the Superstars made their entrances through the visitor’s dugout. The main card featured five title bouts and two Royal Rumble matches as it clocked in at just under five hours long!

The ladies of Smackdown kicked off the main card as Becky Lynch sought to regain her title after losing it at December’s Tables, Ladders, and Chairs pay-per-view. Asuka retained her title as she first applied the Asuka Lock and rolled it into a bridge for a sensational submission victory.

After The Miz was unable to compete in the finals of the “Best in the World” tournament at the Crown Jewel pay-per-view due to an injury, Shane McMahon stepped in and defeated Dolph Ziggler to earn the trophy. The Miz then encountered Shane-o-mac last month on Smackdown Live with a “heartfelt” plea for Shane to join him in a run for the tag team titles. Shane accepted the invitation and the two came prepared to bring the fight to the defending champs. Midway through the match, Shane McMahon appeared to have his prime opportunity for an Oh Sh*t moment as he attempted the Coast to Coast on both Cesaro and Sheamus only to have it thwarted as he landed himself in the Cesaro Swing. Shane McMahon soon redeemed himself after he was rescued from suffering a Brogue Kick and subsequently landed a perfectly executed Shooting Star Press on Cesaro to score the pinfall victory and crown new tag team champions!

This contest ended in a vicious fury. Ronda appeared to be in dire straits as she was trapped in an armbar submission attempt by Banks. Ronda was able to roll out and execute a gutwrench powerbomb which she immediately followed up with the Piper’s Pit for the pinfall victory.

Entering this match, we only knew that number 30 would be filled by Carmella as a result of her Mixed Match Challenge victory with R-Truth. The first two entrants in the contest were NXT alumni Lacey Evans and Natalya. Natalya set a Women’s Royal Rumble match record as she lasted an amazing 55:58. A couple of other notable entries in the match were Nikki Cross who made her debut from NXT at number eight and Alexa Bliss who made her return to in-ring competition for the first time since September at number 26. The dubious distinction of the first woman to be eliminated belonged to entrant number four, Liv Morgan, as she was the recipient of a back body drop over the top rope by Natalya.

Lana entered the match at number 28 but unfortunately was unable to walk to the ring due to an injury she sustained after she was knocked off the ring apron during Rusev’s title loss earlier in the evening. After Carmella entered at number 30, Becky Lynch made her way out and pleaded with backstage official Fit Finlay to let her take Lana’s place which he obliged.

The final four in the match were Bailey, Flair, Nia Jax, and Becky Lynch. Bailey was quickly eliminated by Jax. Shortly thereafter, Jax found herself on the apron after she squashed Flair and Becky in the corner, Lynch rolled out of the ring to the floor. Moments later Jax found herself attempting to reenter the ring from the apron after an exchange with Flair as Becky emerged to pull Nia off the apron and eliminate her. Before Becky could get into the ring, Nia would not go quietly and attacked her at ringside leaving her with a knee injury. Becky was still able to overcome the odds and eliminated Charlotte to earn herself a title shot at WrestleMania.

The long standing feud between these two combatants, that commenced just before Survivor Series when Bryan shocked the WWE Universe and took the WWE Championship from The Phenomenal One on an episode of Smackdown Live, began another chapter this evening. Late in the contest, Eric Rowan made his shocking return and headed to ringside and just stood and watched. Moments later, the referee was knocked out by a missed enziguri attempt by Daniel Bryan. Styles proceeded to hit the Styles Clash but Rowan quickly made his presence felt as he entered the ring and unceremoniously picked up Styles by his face and slammed him to the mat. This newly formed alliance allowed Bryan to score the pinfall and retain his title.

Mr. McMahon removed Braun Strowman from this match as punishment for destroying his limo. Mr. McMahon then held a Fatal 4-way match to determine Lesnar’s opponent with the combatants being Balor, John Cena, Drew McIntyre, and Baron Corbin. Balor landed the Coup de Grace on John Cena to earn his position in the match.

Balor certainly held his own against Lesnar throughout the match. It appeared as though Balor was going to win the title after he landed the Coup de Grace but as he went for the pin, Brock locked in a Kimura out of nowhere to earn the submission victory. Seemingly embarrassed by how susceptible he appeared at the hands of the much smaller Balor, Lesnar proceeded to lay waste to him as he delivered several suplexes that were capped off by an F5.

Like the Women’s Royal Rumble, the only slot designated beforehand was number 30. R-Truth earned this spot as a result of his Mixed Match Challenge victory with Carmella. It was also reported prior to the show that John Cena would not compete as a result of an injury sustained on RAW and would be replaced by “The Monster Among Men” Braun Strowman.

The first two participants in the match were Elias and an absolute shocker in “Double J” Jeff Jarrett! Just as the WWE Universe thought they were going to be treated to a rendition of Jarrett’s “With My Baby Tonight” recorded way back in 1995, Elias lived up to his reputation. Jarrett was the first elimination of the match after Elias smashed his guitar over his back and tossed him out of the ring. Some other notable entries in the contest included WWE Hall of Famer Kurt Angle at number four, the new NXT North American Champion Johnny Gargano at number six, and former NXT Champion Aleister Black. Just as we thought all of the surprises of the evening were exhausted, enter R-Truth at number 30.

Truth was just a few words into his trademark entrance song as Nia Jax emerged from the dugout and ambushed him. Leaving R-Truth in a heaping pile of carnage, Nia Jax took his spot in the match! Jax eliminated Mustafa Ali and then was eliminated by Rey Mysterio after being victimized by an RKO outta nowhere.

The final four participants in the match were Andrade, Dolph Ziggler, Braun Strowman, and Seth Rollins. Braun made quick work of Andrade and Ziggler leaving himself in a showdown with Rollins. Braun and Rollins brought us an exciting conclusion to the match as they delivered some anxiety inducing moments fighting on the ring apron. Rollins finally dropped Braun to his knees and delivered a curb stomp that sent Braun to the floor and punched his ticket to WrestleMania! 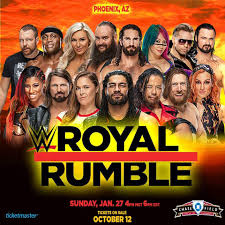