RUNGVISAI VS. CUADRAS CLASH IN PHOENIX

Srisaket Sor Rungvisai and Carlos Cuadras will reignite their rivalry with the vacant WBC World Super-Flyweight belt on the line at the Footprint Center in Phoenix, Arizona on Saturday February 5, live worldwide on DAZN.

TICKETS STARTING AT $20 (PLUS FEES) ARE ON SALE AT 12PM MT AT TICKETMASTER.COM

The pair first met in May 2014 for the same title, with Cuadras claiming the crown via a unanimous technical decision following an accidental headclash in Mexico.

There’s more than just the WBC crown on the line for Rungvisai (50-5-1 43 KOs) and Cuadras (39-4-1 27 KOs), with the winner likely to be pitted against the winner of the March clash between Juan Francisco Estrada and Roman ‘Chocolatito’ Gonzalez, setting up more fireworks in the always exciting 115lb division.

Rungvisai heads into the bout on the back of three victories in Thailand following his clash with Estrada where he surrendered the WBC crown that he fights Cuadras for. Victory in the rematch in Phoenix would see the 35 year old win the green and gold strap for the third time and almost nine years since he first picked up that crown.

Cuadras ended Rungvisai’s reign on that occasion and the Mexican made six defenses of the title before Chocolatito took the crown in California in September 2016. It’s the second time that the 33 year old has tried to reclaim the throne and comes on the back of his last battle for the belt where he floored defending champion Estrada in the third round of his defense before the champion prevailed in Mexico in October 2020.

“I'm really looking forward to winning in this championship bout,” said Rungvisai. “I really want to become the first three-time WBC champion of Thailand. I also have an unfinished business with Juan Francisco Estrada. I would like to take this opportunity to thank Matchroom and DAZN for making this fight possible".

“I am very excited for this opportunity to fight for another world title,” said Cuadras. “We are sparring 3-4 different southpaws that have a similar style to Rungvisai. We are ready to win, and I am training very well in the high-altitude mountains of the ceremonial center in Otomi in México.

“I want to thank firstly God and Teiken, especially Mr. Honda who has never left me behind and always given me a hand in boxing. We will not disappoint come fight now and bring back another title for Mexico and Teiken.”

A stacked card in support of the rematch is led by Light-Flyweight sensation Jesse ‘Bam’ Rodriguez as he closes in on World title action. Rodriguez (14-0 10 KOs) dispatched Jose Burgos in style inside four rounds in his last outing in Fresno in October, and the WBA #2 and WBO #4 will look to enhance his claim for world honors against an opponent to be named soon.

There’s more World title action on the card as Jamie Mitchell makes the first defense of her WBA Bantamweight title against Carly Skelly. Mitchell (7-0-2 4 KOs) claimed the strap in October in England by seeing off Shannon Courtenay via majority decision, with the belt only on the line for the American after then-champion Courtenay failed to make the weight. After winning the belt in Liverpool, Mitchell will defend the title against a Liverpudlian fighter, as Skelly (4-0-1) fights for her first World title having picked up the WBC International Super Bantamweight title at home against Dorota Norek in October, a year after a split draw against Amy Timlin for the Commonwealth crown.

Raymond Ford defends his WBA Continental Featherweight title for the second time against Edward Vazquez. Ford (10-0-1 6 KOs) impressed in his first defense in New York in November, stopping Felix Carabello in eight rounds to retain the belt he landed in England in August via a third round KO of Reece Bellotti. Unbeaten Texan Vazquez (11-0 3 KOs) will look to end Ford’s reign in Phoenix, and the 26 year old fights for his first title in his 12th pro outing.

“Srisaket and Carlos promises to be another brilliant Super-Flyweight World title battle,” said promoter Eddie Hearn. “Carlos got the better of Srisaket in their first fight seven years ago – and there’s no doubt in my mind that this will be a real fan-friendly war with so much at stake.

“The undercard is stacked with talent. Jesse is a World champion in waiting and is so exciting to watch, Jamie was terrific in beating Shannon in Liverpool and I know Carly will give everything to try to take the title back to England and Ray’s stock rises with every impressive win he notches. Aaron is our latest signing and one to watch, Khalil is looking to bounce back from a draw last time out and it’s a great opportunity for local guys Adam and Elijah to make an impression under the bright lights.”

Rungvisai and Cuadras headline the event that was initially due to be held at the Gila River Arena in Glendale, Arizona, but logistical and operational issues mean the night moves venues but stays in Arizona and just a short distance to the downtown home of the Phoenix Suns. It’s a return to the venue for Matchroom where Daniel Jacobs defeated Julio Cesar Chavez Jr in December 2019. A clash between Jessie Vargas and Liam Smith was slated to top the bill but the former tested positive for COVID forcing it to be postponed, with the fight set to be rescheduled. 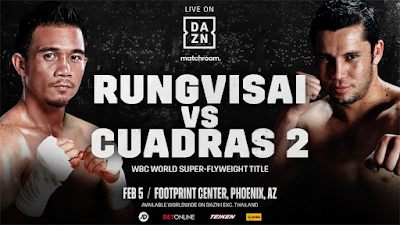