LARA RETURNS AGAINST SANCHEZ ON MARCH 5

Mauricio Lara returns to action against Emilio Sanchez at the Pechanga Arena San Diego in San Diego, California on March 5, live worldwide on DAZN, on a packed event topped by the mouth-watering trilogy clash between Juan Francisco Estrada and Roman ‘Chocolatito’ Gonzalez.

TICKETS STARTING AT $50 (PLUS FEES) ARE ON SALE NOW AT AXS.COM

Lara (23-2-1 16 KOs) makes a welcome return to the ring following his nasty cut in his rematch with Josh Warrington. The Mexican traveled to Yorkshire in September to take on the Leeds man at Headingley Stadium in a rematch having stunned the boxing world by stopping for former World ruler in the ninth round of their clash in February in London. The rematch was heating up before an accidental headclash in the second round left Lara with a nasty gash over his left eye and the contest had to be waved off.

The 23 year old has healed up and will look to get back into the mix for major bouts and World title action at Featherweight, and the first man in the way of his path to the top table is Sanchez (19-1 12 KOs). The 27 year old Californian will be looking to provide an upset of his own in the biggest fight of his eight year career to date, with Sanchez fighting over ten rounds for the second time in his career and entering the fight on the back of his 12th KO win back in May over the experienced Christian Esquivel.

There’s a stacked card in support of the trilogy clash between Estrada and Chocolatito – with the focus on Eddie Hearn’s bright young talents and an exciting debutant.

Angel Fierro is eager to gatecrash the party at the top of the Lightweight division, and the WBO #4 will display his credentials in the second defense of his WBO NABO title against Juan Carlos Burgos. Fierro (19-1-1 15 KOs) picked up the vacant title with a stunning KO win over Alberto Machado in March – climbing off the deck in the first and second rounds to put the former World ruler away in the sixth. The 23 year old San Diego based Mexican blasted Cristian Bielma away in four rounds in his first defense in Puerto Vallarta in November, and will be looking to make a similar statement against the experienced former World title challenger Burgos (34-6-2 21 KOs).

Diego Pacheco (13-0 10 KOs) fights in the paid ranks for the 14th time and the rangy Super-Middleweight tastes eight round action for the fourth time against Genc Pllana (9-3-1 5 KOs).

Marc Castro (5-5 5 KOs) is in his sixth pro fight and has yet to go the full distance, his opponent over six rounds will be named soon.

Anthony Herrera (1-0 1 KO) made an explosive start to the pro game with a second round KO win on the undercard of the Teofimo Lopez vs. George Kambosos Jr blockbuster in New York in November, and the 21 year old former Team USA talent goes for the second time in San Diego against an opponent to be named.

Debutant Skye Nicolson completes the card, and the Australian star will make her long-anticipated debut at Featherweight in California. The 26 year old won Commonwealth Games gold at her home games in 2016 and represented Australia at the 2020 Olympics in Tokyo, and now looks to translate her amateur success into the paid ranks.

“This is a great night of boxing with a stacked undercard beneath a brilliant main event,” said promoter Eddie Hearn. “You have so many fighters on this card that can become big stars in the future. Mauricio recorded one of the upsets of 2021 against Josh and is looking to cement his name as a real contender at Featherweight.

“There’s some exciting young stars in action on the rest of the card. Angel is chasing down his fellow contenders and champions at Lightweight, Diego is such a handful and is ready to step up this year, Marc has blasted every opponent away to date, Anthony looked the business on his debut and Skye is going to be a big hit in the paid ranks – March 5 is going to be a spectacular night of action from start to finish.” 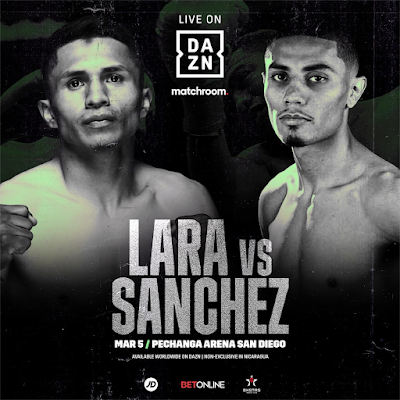