WWE returned to the Barclays Center in Brooklyn, NY this evening for the longstanding Thanksgiving Day/Week tradition - Survivor Series. The theme of brand supremacy that has established itself in recent years returned tonight as RAW was pit against Smackdown (may as well have been Team FOX vs. Team USA Network). This not only meant no clashes like the classic showdown of The Hulkamaniacs vs. The Warriors at the 1990 installment of the show, but also, no titles would be contested as we would only witness some champion versus champion encounters. Following another round of performers receiving their walking papers this week including John Morrison, Isaiah “Swerve” Scott, and Jaxson Ryker, not to mention the incredible AEW Full Gear event last weekend, WWE really needed a big show tonight. The card tonight featured a modest six matches which included two “classic” Survivor Series matchups - both Team RAW vs. Team Smackdown.

The opening bout pit RAW Women’s Champion Becky Lynch against Smackdown Women’s Champion Charlotte Flair in our first match for brand supremacy. With rumors swirling that Charlotte has been unhappy with her recent booking, one has to wonder how she felt about opening the show. Mr. McMahon seems to be playing a dangerous game with arguably his biggest draw in the Women’s Division - especially when her fiancée, Andrade El Idolo, left for AEW in the past year. In the definition of a back and forth encounter, this contest ended in a series of roll up pin attempts that finally saw Becky come out victorious with an assist from holding the middle rope.

The first of the “classic” Survivor Series match-ups began in underwhelming fashion as Kevin Owens who started the match for Team RAW immediately left the ring after the opening bell, walked up the ramp, was counted out, and left the arena to stick it to his team. This apparently was a recurring theme in the bout as Lashley and McIntyre got carried away while embroiled in combat outside the ring and were both counted out. Late in the match, Sheamus was rolled up for the pin and eliminated by Austin Theory. Jeff Hardy was then left in seemingly dire straits as he was leveled by his own partner Sheamus as he departed the ring. Hardy quickly turned the tables and finished off Theory with the Swanton Bomb leaving Rollins and himself as the final two combatants. Hardy attempted another Swanton Bomb moments later only to be unmercifully met with Seth Rollins’ knees in the small of his back. Rollins capitalized with the Curb Stomp to solidify the win for Team RAW.

With all of the recent releases, I was impressed that a battle royale could be assembled but in all seriousness, some of the notable participants included AJ Styles, Cesaro, Omos, Bobby Roode, and Jinder Mahal. At one point, the crowd was so disinterested in this card-filler, that they began chanting, “We want pizza” as the match was sponsored by Pizza Hut. The final four participants in this match were The Street Profits, Omos, and Ricochet. This was no contest as Omos disposed of all three men with little to no effort.

The Smackdown Tag Team Champions, The Usos, squared off with the RAW Tag Team Champions, RK-Bro, in the next clash of champions this evening. In the closing moments of the match, Jimmy Uso had not realized that Orton had blind tagged himself into the match before he was super kicked off of the ring apron. Jimmy, believing the legal man was still in the ring, proceeded to maintain his focus on Riddle which would prove to be his downfall. Jimmy ascended to the top rope to finish Riddle off with a splash, however, he was greeted with an RKO Out of Nowhere which allowed Orton to secure the pinfall for his team.

The penultimate bout of the evening pit the women’s teams from RAW and Smackdown against each other as the battle for network…or rather brand…supremacy rattled on. Late in this contest, it appeared that the numbers would be insurmountable for Bianca Belair as she was the lone participant remaining for Team RAW against Shotzi, Banks, Baszler, and Natalya for Smackdown. Following some dissent in the Smackdown ranks, Sasha Banks was counted out and thus eliminated. Belair then proceeded to make quick work of Natalya and Baszler leaving her alone with Shotzi. Shotzi posed some resistance but found herself succumbing to the Kiss of Death shortly thereafter.

The main event of the evening presented a showdown between the Universal Champion, Roman Reigns, and the WWE Champion, Big E, in the final encounter for brand supremacy. What began as a rather pedestrian match certainly built momentum as it progressed towards the closing moments. First, Big E withstood three consecutive Superman Punches and answered with the Big Ending, however, he was unable to secure the pinfall as Roman grasped the bottom rope. The two then erupted into a brawl outside the ring which finally culminated when the men returned to the ring and Roman delivered a brutal spear to put Big E away.

The closing moments of the event were certainly awkward as the entire show celebrated the 25th anniversary of The Rock’s debut at Survivor Series 1996, was sponsored by The Rock’s new Netflix movie Red Notice, and Paul Heyman was informed that Brock Lesnar’s indefinite suspension would be coming to an end soon yet neither man made an appearance at the end as the commentators sounded distracted by someone speaking to them in their earpieces…makes you wonder. 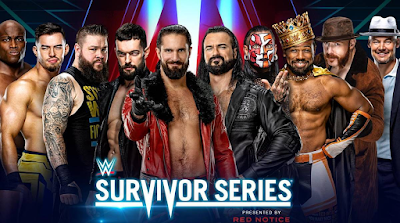