All Elite Wrestling returned to pay per view this evening with Double Or Nothing. The event emanated from Daily’s Place in Jacksonville, Florida in front of, not only a sold out crowd, but also one sold to the venue’s capacity - much unlike WWE who are still performing in front LED screens a couple hours away. This evening’s stacked card featured the defense of every AEW championship and was headlined by a double main event - Kenny Omega’s defense of the AEW World Heavyweight Championship against PAC and Orange Cassidy in a triple threat affair, as well as, a Stadium Stampede match between The Inner Circle and The Pinnacle.

Deeb and Riho more than warmed up the capacity crowd on the lone pre-show bout as the ladies left nothing to spare with the NWA gold on the line. After targeting Riho’s knee for much of the contest, Deeb finally forced her to tap out in the end with a modified half-crab. 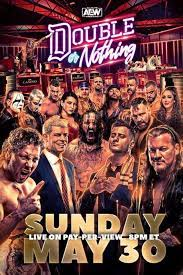