Following two nights of Wrestlemania in front of a capacity crowd at Raymond James Stadium last month, WWE reverted back to their dystopian setting this month as Wrestlemania Backlash emanated from the new home for the WWE Thunderdome, The Yuengling Center on the campus of the University of South Florida. This is a curious development since AEW will present their annual Double or Nothing pay per view in two weeks and have announced they will sell Daily’s Place to capacity - a venue which stands only a couple hours away in Jacksonville. Nonetheless, this evening’s event represented a culmination of the fallout from the “Showcase of the Immortals” as five titles were contested on the six bout card with the headline bout featuring Roman Reigns stepping toe to toe with Cesaro for the Universal Championship.

Charlotte firmly reasserted herself in the RAW Women’s division the night after Wrestlemania as she brutally assaulted new champion Rhea Ripley and manipulated her way into a title opportunity. This of course did not sit well with the former champion, Asuka, hence the table being set for our triple threat match this evening. Charlotte established her dominance for much of this bout, however, she would not factor into the decision. In the closing moments, Flair stood on the ring apron and delivered a kick to the face of the charging Asuka. The momentum not only drove Charlotte to the arena floor, but also set up Asuka for the Riptide which solidified Ripley’s title defense.

This contest was originally supposed to feature Rey teaming with his son Dominik until Roode and Ziggler brutally attacked him backstage during the Kickoff Show. Rather than find another partner, Mysterio elected to challenge for the titles on his own. Rey put forth a valiant effort to open the match, however, it did not take long for the numbers game to eventually overwhelm him. After being the recipient of a vicious beat down, topped by a Fameasser delivered by Dolph Ziggler, a hobbled Dominik Mysterio made his way to ringside to aid his father. Dominik’s presence revitalized Rey as they turned the tide of the bout. In the closing moments, Rey executed the 619 on Roode. Rey then proceeded to tag in his son who delivered a Frogsplash from the top rope crowning the first ever father-son tag team champions in WWE history.

After being embarrassed by Damian Priest and Bad Bunny at Wrestlemania, The Miz sought retribution this evening. Following his victory over John Morrison on Monday night, Priest was able to name the stipulation for tonight’s match and elected for a Lumberjack Match. With the event being sponsored by Dave Bautista’s movie Army of the Dead, WWE elected to make all of the lumberjacks…zombies…yes, you read that correctly. In the closing moments, Priest was able to withstand a running knee from The Miz and finished him off with the Hit the Lights for the pinfall. Following the match, The Miz was swarmed by the zombie lumberjacks as Priest escaped the ring.

Belair found herself in the crosshairs of Bayley following her victory at Wrestlemania as the former champ has made it a point to regain her title especially after being left off the card at WWE’s signature event. I’ll be quite honest, this match didn’t hold a candle to the triple threat contest that opened the show. The closing moments saw Bayley attempt a pinfall only to have Belair use her excessively long hair to create leverage and reverse the pin to retain her title.

Following his retention of the WWE title over McIntyre at Wrestlemania, Bobby Lashley again found himself set to defend his championship against him at Backlash following Drew’s victory over Randy Orton recently on RAW. As if this weren’t enough, Braun Strowman reestablished his dominance in recent weeks and manipulated his way into the bout as well stacking the deck against “The Almighty” Bobby Lashley. Early in the match, Lashley and McIntyre found themselves engulfed in a brawl at the top of the entrance ramp that concluded with Drew thrusting the champion through an LED display which erupted in sparks. McIntyre and Strowman proceeded to demolish the arena and each other as Lashley was out of the equation. In the closing moments, McIntyre delivered the Claymore Kick to Strowman before he was ambushed by Lashley who ejected Drew from the ring. Lashley proceeded to deliver a devastating spear to Strowman setting up the pinfall victory.

Following monumental wins over Seth Rollins at Wrestlemania and recently on Smackdown, Cesaro found himself competing for his first world title in WWE. Cesaro had one of his finest matches, however, it just wasn’t enough in the end as Roman also put worth one of the most well-rounded efforts I’ve ever seen where he actually utilized more than three moves and demonstrated legitimate technical expertise. In the end, Roman cinched in a guillotine choke that rendered Cesaro unconscious and allowed him to retain his title. Following the match, Jey Uso entered the ring and praised the “Tribal Chief” for his victory. As if this wasn’t enough, Seth Rollins then made his way to ringside and proceeded to lay waste to Cesaro with a steel chair and a curb stomp to close the broadcast. 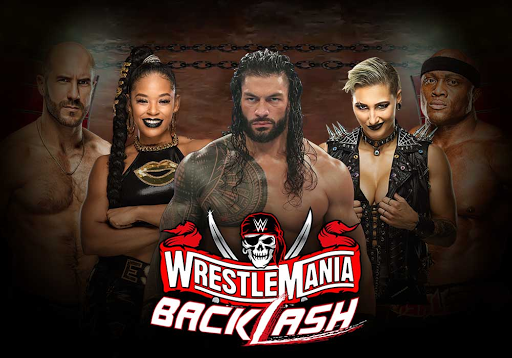