They may call boxing “the sweet science” but it is also the “art” of self-defense. There is a reason for both of those terms, and trust me, boxing is as much of an art form as anything else humans have done to express themselves in history.

Now, at first glance many may ask, “What does boxing and self-defense have to do with art or self-expression?” Simple, if you are like most people there is a good chance you have some feeling of fighting in your heart, because to just survive we need to be able to fight. Not always physically, but mentally and emotionally. At some point in our day, we all decide to keep fighting the good fight.

There are not many places where you will see such a physical expression of this truth than in a boxing ring. You see two people coming together to expresses this truth and, in many ways, express themselves with the aggressive, physical, and artistic form that is boxing.

I did not always see boxing as a physical art form like dance. Like most that love boxing, I got interested in the sport due to its filter for aggression.

I was not aware of the true artistic quality of the sport at first, because like most you think it is only about how hard you hit and how strong you are. But as the great late trainer of Mike Tyson, Cus’ D’Amato once said, “Boxing is 90% in the mind.”

It takes a very creative and expressive mind to truly learn how to box well. I started seeing the real beauty in boxing as not only the ability to make your opponent miss, but the ability to learn how to setup your own attack through the most subtle of graceful moves and thinking. At that moment, I began to see the true beauty of Muhammad Ali, Sugary Ray Robinson, and many other great boxers.

One of the most beautiful to watch, a real poet with fists, who was poetry in motion, was Jersey Joe Walcott. Before the great Ali danced around the ring, there was Jersey Joe, who used shuffling, fast hands, and great timing to give some of the true greats of boxing, like Joe Louis, Ezzard Charles and Rocky Marciano, a difficult fight. Jersey Joe showed how great boxers can be when they use their whole body to defend themselves, while setting up their own attack.

Jersey Joe proved boxers are physical performance artists when they are living up to their full potential. He was once named the 20th greatest boxer of any weight class by the legendary boxing writer Bert Sugar.

There was another man that I discovered through my obsession with boxing. That man is Carl LeVotch. Carl is from the same geographical area that Jersey Joe represented as a world champion, Camden, New Jersey. Also, his blood line is rich, with an athletic father who actually sparred the great Jersey Joe. Carl, who was a boxer in his youth, shows one can not only be artistic in the ring, but can also be a better artist outside of the ring from the experiences one has in the ring.

Carl just finished his latest project, which he has been working on the last year, and I’m certain he considers his “magnum opus.” This latest project is the Jersey Joe Walcott statue that will be unveiled this Saturday, October 16, 2021 in Camden. This work demonstrates how in his lifetime, a man can be a true poet warrior and fighting artist. There have been other poet warrioers and fighting artists throughout history like the great Ali, who could write poetry and was articulate, and the great Japanese Samurai, philosopher, and writer Miyamoto Musashi, who wrote The Book of Five Rings, and talks about the importance of the training involved with the Katana. Musashi wrote “The true science of martial arts means practicing them in such a way that they will be useful at any time, and to teach them in such a way that they will be useful in all things.”

That quote I think sums up Carl perfectly. He used the discipline and vigor that he had learned from boxing to become a much better artist. Because once you learn how to fight, you never lose the important lesson that it teaches about being a fighter in every aspect of your life. Carl is a true fighter, and artist, who fights to make his art out of the ring as great, as Jersey Joe fought to make his art great in the ring.

I can’t think of a more poetic justice than the best heavyweight from New Jersey being honored by the best fighting artist in my eyes, who happens to hail from the same place as Jersey Joe.

I know Jersey Joe would be just as proud on Saturday as he was the night he knocked out Ezzard Charles to officially become a world heavy champion from New Jersey. As proud as Jersey Joe would have been, I am even more proud that I can call Mr. LeVotch my friend.

If you want to be a part of an event that will immortalize one of the all-time greats of heavyweight boxing, head to the Camden waterfront this Saturday afternoon. 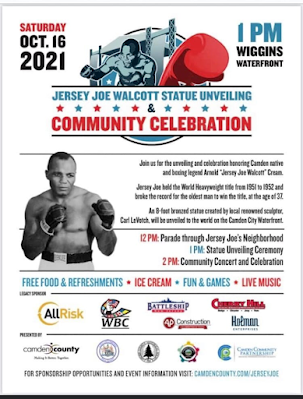