With the exception of this year’s Wrestlemania back in April, WWE finally put an end to the Dystopian Era (defined by them as their time spent in the Thunderdome) this past Friday on Smackdown as fans were finally welcomed back - over a year after AEW had already done so. That brings us to tonight where WWE emanated from Dickies Arena in Fort Worth, TX as they hosted Money in the Bank. WWE may actually be starting to feel some pressure from AEW as tonight’s card was one of their better, at least on paper, in recent memory. The event was headlined by two Money in the Bank ladder matches, as well as, Roman Reigns versus Edge for the Tribal Chief’s Universal Championship.

Alexa Bliss vs. Liv Morgan vs. Nikki A.S.H. vs. Natalya vs. Tamina vs. Zelina Vega vs. Naomi vs. Asuka

In one of the most landscape-defining matches WWE holds each year, eight women entered the ring with the Money in the Bank briefcase suspended above the ring. For those unfamiliar with this match, the first participant to scale a ladder and retrieve the briefcase would earn the ability to challenge for any world title over the course of the next year. This bout seemed rather abrupt as far as these matches go historically and it was devoid of any significant death-defying spots. The closing moments saw Alexa Bliss taken down at ringside and subsequently buried with eight ladders by the other competitors. The remaining seven women then proceeded to stage three ladders in the center of the ring as all of them made their way to the top. As the infighting ensued, Nikki climbed the center ladder unnoticed and removed the briefcase without resistance.

Following their decimation of The New Day back at Wrestlemania, A.J. Styles and Omos have maintained their reign over the RAW Tag Team Division. Their challengers this evening, The Viking Raiders, the former tag team champions still seeking to regain their footing following the return of Ivar from a lengthy injury absence. The Viking Raiders seemed poised to pull off the upset until they ran into the 7’3” Omos. Erik propelled himself off of the ropes thinking he would be able to mount some form of offense against the towering Omos…well he was mistaken as Omos grabbed him by the head, hoisted him up in the air, and slammed him to the canvas setting up the easy pinfall.

Kofi Kingston was absolutely zero competition for the champion as he constantly found himself being tossed around the ring and manhandled like a rag doll. Lashley finally put an end to this one-sided affair as he cinched in the Hurt Lock for the submission victory.

After their championship encounter at last month’s Hell in a Cell pay-per-view ended in Ripley getting herself disqualified, these two ladies again found themselves toe-to-toe with championship gold on the line. The Queen reclaimed her spot atop the Women’s Division this evening as she was in vintage form. The beginning of the end for Ripley began after Flair executed the Natural Selection from the top rope. Moments later, she trapped Ripley’s leg in between the steel ring stairs and ring post where she kicked the stairs to deliver a devastating blow to the champion’s knee. This opened the window for Flair to execute the Figure Eight as she captured the RAW Women’s Championship.

John Morrison vs. Seth Rollins vs. Shinsuke Nakamura vs. Big E vs. Ricochet vs. Drew McIntyre vs. Riddle vs. Kevin Owens

After the women’s match kicked off the show, it was now the men’s turn to determine who would walk away with an opportunity to challenge the champion of their choosing for the next year. Halfway through the match, Drew McIntyre appeared poised to capture the briefcase until Jinder Mahal, with Veer and Shanky in tow, made their way to the ring, ambushed Drew, and dragged him backstage. In the closing moments of the match, Seth Rollins ascended to the top of the ladder after he propelled Kevin Owens out of the ring breaking him, and a ladder, in half. As Rollins reached for the briefcase, Big E climbed up behind him and executed the Big Ending dropping him to the canvas. Big E then quickly climbed up the ladder to retrieve the briefcase.

After Edge won the Royal Rumble, his championship opportunity turned into a triple threat affair as Daniel Bryan was inserted into the match - an action which essentially may have been the determining factor in his loss. Following several weeks away from Smackdown, Edge returned to challenge The Tribal Chief for his title in a singles match. Roman Reigns controlled much of the early portion of this bout as he attempted to slow Edge down with several submission holds as he imposed his will. This strategy worked well until Edge regained momentum with the Edgecution just moments before he speared Reigns through the ringside barrier.

The action then returned to the ring where Reigns managed to execute a Superman Punch that propelled Edge into referee Charles Robinson leaving no referee. With no referee present, Edge proceeded to cinch in a crossface with the use of a chair leg. The Usos attempted to put an end to this, however, their interference attempt was thwarted by the Mysterios. Next, Seth Rollins made his way into the ring and delivered a kick to the head of Edge which broke the crossface. Edge again overcame adversity and delivered a spear to Reigns, however, there was not referee to count the pinfall. A referee finally made his way to the ring but was only able to count to two.

As Edge sized up Reigns for another spear, Rollins again climbed up to the ring apron which caused enough of a distraction for Roman to recover and deliver a spear of his own to secure the retention of his title. Following the match, Rollins and Edge engaged in another brawl that spilled into the crowd leaving Reigns and Paul Heyman alone in the ring. As Reigns proceeded to address the crowd, he was interrupted by the return of John Cena clearly setting up their rumored showdown for Summerslam. 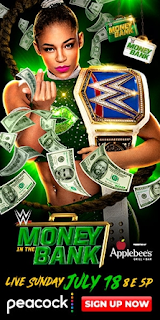