As we approach the end of month six of the “Quarantine Era,” WWE Summerslam emanated this evening from their new temporary home - the WWE Thunderdome (can you say copyright infringement?). The introduction of this new venue came from the boss himself, Mr. McMahon, this past Friday night on Smackdown. For those who are unaware, the Thunderdome is actually the Amway Center in Orlando, the normal home of the Orlando Magic, with large video screens lining the arena seats with the faces of fans watching from home on their webcams - if I’m being honest, I appreciate the effort and it is nice to see a show held in an arena, however, it also reminds me of a ‘90s sci-fi movie set in a dystopian future. Nonetheless, the show which held the tag line “You won’t see it coming” featured a card of seven matches with five titles defended.

Over the past two weeks, Asuka found herself earning an opportunity at not only one, but both, of the top women’s titles in WWE. First, she defeated Bayley recently on RAW to earn a shot against Sasha Banks for the RAW Women’s Title and then a women’s battle royal on Smackdown to also earn an opportunity at Bayley’s Smackdown Women’s Title. Asuka clearly controlled the tempo of this entire bout, however, the number’s game proved to be the deciding factor. In the closing moments, Bayley was in dire straits hung up on the ropes as Asuka propelled herself at her. At the last second, Banks pushed Bayley out of the way and took the shot for her. This opened the opportunity for Bayley to roll up a distracted Asuka for the pinfall.

Late in the contest Vega climbed to the ring apron to attract the attention of the referee as Ford was propelled into the ropes by Angel Garza knocking her to the floor. This prompted Andrade to attend to Vega leaving his partner high and dry. Garza was overwhelmed by The Street Profits with Ford ascending to the top rope for an impressive splash that solidified their victory.

The months of drama between the former Fire & Desire cohorts finally culminated this evening in a Loser Leaves WWE No Disqualification Match. Sadly, the most entertaining part of this match was Mandy Rose’s futile effort to flip a table upright after opening the legs. This bout reached it’s merciful conclusion as Rose drove a running knee into the cranium of Deville allowing her to secure the pinfall victory and sending Deville packing - could she appear in AEW in 90 days???

Over the past few months we’ve witnessed the unfolding of an ugly rivalry between Rey Mysterio and Seth Rollins that not only saw Rey “lose his eye” at Extreme Rules but also have his son Dominik drawn into the fold. Following a vicious kendo stick beating at the hands of Rollins and Murphy recently on RAW, this bout came to fruition and also marked the in-ring debut of the young Mysterio. Dominik Mysterio made a solid showing in his debut WWE match including the execution of a frog splash early in the contest, however, it wasn’t enough to overcome the Monday Night Messiah. In the final moments of the bout, another window of opportunity opened for Dominik as Rollins and Murphy became preoccupied with Rey and handcuffed him to the ropes. Dominik proceeded to take down Rollins and scaled to the top turnbuckle for another frog splash attempt. This time Dominik was met with a pair of knees to the midsection followed by a curb stomp that sealed the victory for Rollins.

After losing her bid at championship gold earlier in the evening, Asuka made her way back out to the ring to square off with Sasha Banks. As we approached the conclusion of this match it appeared the number’s game would again be the determining factor in the contest as Bayley this time saved Banks from Asuka. Banks proceeded to cinch in the Bank Statement, however, Asuka was able to roll through and reverse it into the Asuka Lock for the submission victory.

Following weeks of revisiting his “Legend Killer” persona with attacks on Christian, The Big Show, Ric Flair, and Shawn Michaels, Randy Orton found himself in the position for a shot at his 14th World Championship against the man who dethroned Brock Lesnar at Wrestlemania, Drew McIntyre. This hard-hitting contest ended in rather shocking fashion. McIntyre couldn’t land the Claymore Kick, then Orton’s attempt at an RKO was thwarted only to see McIntyre win with an underwhelming backslide pin to retain the title.

Following the Swamp Fight at Extreme Rules last month, we saw the reemergence of The Fiend and the darker side of Braun Strowman. After weeks of mind games between the two, we arrived to a Falls Count Anywhere Match for the Universal Championship tonight. Braun attempted to pull out an additional stop to put away Wyatt ass he used a box cutter to remove a portion of the ring canvas and padding to expose the wood planks, however, it backfired as he was met with the Sister Abigail as Wyatt regained the title. After the end of the match, Roman Reigns emerged from out of nowhere to lay waste to both Wyatt and Strowman after several months out of action declaring that he was the true owner of the title. 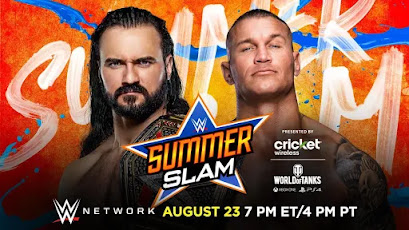