The second pay per view of what I am dubbing WWE’s Quarantine Era, emanated from two locations this evening - the WWE Performance Center in Orlando, FL and from the roof of WWE Headquarters in Stamford, CT. I give WWE credit for thinking outside the box this evening to try and keep the product interesting when working with an eerily, mostly empty venue by taking the chaos to a novel location for the bouts that hold this event’s namesake - although it may behoove them to take a page out of AEW’s book and have the wrestlers sit at ringside during the matches to supply some sort of atmosphere. Nonetheless, the seven match card included four title bouts and was headlined by the men’s and women’s Money In The Bank ladder matches.

The New Day recently regained the tag team titles from Miz & Morrison to become eight-time tag team champions and were immediately thrown into the fire this evening forced to defend their titles against three other teams. In the closing moments, it appeared that The Forgotten Sons were beginning to turn the tide until Ryker was banned from ringside for his interference causing enough of a distraction to allow The New Day to regain control. Kofi first neutralized Lince Dorado with the Trouble in Paradise allowing Big E to finish off Gran Metalik with The Big Ending solidifying their title defense.

This match was initially scheduled to pit MVP versus R-Truth until Bobby Lashley made his way to ringside and told Montel Vontavious Porter to take the night off. To say this was a squash match is an understatement as R-Truth was unable to mount any real offense as Lashley manhandled him and finally finished him with a spear that broke him in half. On a side note, it continues to perplex me why R-Truth has mainly been comic relief in his lengthy second run with WWE after he was a very reputable heavyweight champion in TNA/Impact where some may remember him as Ron “The Truth” Killings but I digress.

Tamina Snuka was certainly game for the task at hand as she manhandled Bayley for the bulk of this contest. We seemed to be moments from crowning a new champion after Tamina executed the Samoan Drop on Bayley, however, Sasha proved to be the determining factor. Banks distracted Tamina just long enough for Bayley to get back to her feet but Tamina was still able to hoist her up for another Samoan Drop attempt only to be thwarted by a rollup that allowed Bayley to steal the pinfall and retain her title.

After earning his first Universal Championship at Wrestlemania by dominating the legendary Goldberg, Braun Strowman made his first defense this evening. For those who have a short term memory, these two men have a deeply rooted history as Strowman was the last addition to the Wyatt Family before it eventually disbanded. Another interesting booking decision for this match was to pit Strowman against the puppet wielding, children’s show version of Wyatt instead of The Fiend - perhaps to preserve the persona and avoid having The Fiend suffer defeat twice in a row. Wyatt appeared like he had gotten into the head of Strowman briefly with the use of some of his Firefly Funhouse puppets at ringside - enough so that he was able to drop him with a Sister Abigail. The Monster Among Men proved to be too formidable of a force, however, as he sealed his victory with a running power slam.

Drew McIntyre made his first title defense since Wrestlemania, the night where he defeated Brock Lesnar for the championship and defended it that same night against The Big Show. Tonight he met a stiff test in the form of muli-time champion, “The Monday Night Messiah” Seth Rollins. Rollins threw everything he had at the defending champ this evening including a Frog Splash, top rope super plex, the Curb Stomp, and the Falcon Arrow but it wasn’t enough as McIntyre was able to drop him with the Claymore Kick to retain his title.

For those not familiar with the stipulation of these matches, it’s simple - scale a ladder in the center of the ring, retrieve the briefcase, and earn the ability to challenge the world champion of your choice at any point during the next year. An interesting dynamic with these matches presented itself as aside from taking place at WWE Headquarters, they also started simultaneously with the women beginning in the lobby and the men commencing from the building’s workout facility. The goal still was for one man and one woman to make their way to the roof of the building where a ring was set up and retrieve their respective briefcases. After roughly 20 minutes of fighting throughout the building, Nia Jax and Lacey Evans were finally the first to make their way to the roof followed shortly thereafter by Asuka. None of the other women ever made it to the roof as Asuka ascended to the top of the ladder at the same time as King Corbin. For good measure, Asuka kicked Corbin off of the ladder and retrieved the women’s briefcase crowning our first winner of the evening in the process. In the closing moments, A.J. Styles and King Corbin found themselves at the top of the ladder fighting over the briefcase. Both men had their hands on the briefcase as it was unlatched and it appeared that Styles was going to walk away the victor as Elias emerged to deliver a brutal, guitar shattering shot to Corbin, however, this caused the briefcase to be propelled into the hands of the new Mr. Money In The Bank….Otis. 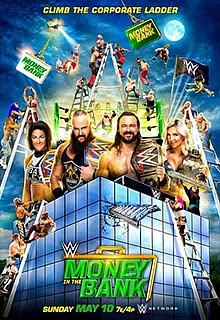