WWE returned again this evening from the Performance Center in Orlando, Florida with night number two of Wrestlemania 36 - yes, I continue to number them. For whatever reason, WWE decided a few years back to leave the number off of Wrestlemania each year as if it dated the event and made it more antiquated. I personally respond to that by saying, “Doesn’t the Super Bowl still use the number system?” If nothing else, labeling this event as it should be, Wrestlemania 36, demonstrates the longevity of the company and it’s ability to continue to cater to it’s target audience. Nonetheless, now that I’m off my soapbox, this evening should prove like last night to offer some shocking moments - particularly in the title matches. This evening’s event offered eight matches on the main card highlighted by Brock Lesnar squaring off with Drew McIntyre for the WWE Championship.

Following her victory in this year’s Royal Rumble match, Charlotte was called out by NXT Women’s Champion Rhea Ripley and in a shocking turn of events accepted her challenge. This also marks the first time that an NXT title would be defended on the grandest stage of them all. Rhea Ripley came to bring the fight to Charlotte tonight but it wasn’t enough. Charlotte systematically dismantled the left knee of Ripley for the duration of the contest until she couldn’t withstand any more punishment. In the final moments of the match, Charlotte cinched in a figure four leglock that she was able to transition into the Figure Eight for the submission victory.

In a classic “we didn’t know what else to do with these competitors so we’ll book them against each other” match, Aleister Black looked to maintain his recent momentum against one of the worst utilized superstars in the company, Bobby Lashley. Lashley used his overwhelming strength to impose his will upon Black for the majority of the match, however, Lana proved to be the ultimate deciding factor. Lashley had Black on his shoulder poised to finish him when Lana ordered her “husband” to spear him. This proved to be Lashley’s fatal flaw as he was unceremoniously met with a Black Mass kick to the mouth which allowed Black to seal the victory.

This match represented absolutely nothing other than revenge. After Dolph and Sonya sabotaged Otis’ Valentine’s Day date with Mandy Rose, Otis made it a point to take out his frustrations on Ziggler after the truth was recently revealed on Smackdown. Otis appeared poised to finish his quest for revenge with the Caterpillar until Sonya intervened and opened the opportunity for Ziggler to strike him between the uprights. Moments later, Mandy Rose made her way to ringside where she slapped the taste out of Sonya’s mouth and with referee Charles Robinson distracted, she slid into the ring and returned the favor to Dolph. Otis proceeded to execute the Caterpillar and solidify his victory.

Following Edge’s miraculous return at the Royal Rumble after a nine year hiatus due to what was once thought to be a career ending injury, Randy Orton turned on and brutally assaulted Edge the following night on RAW. This violence only escalated a matter of weeks later as Orton again struck - this time with Edge’s wife, Beth Phoenix, as the victim. With all of the events that have transpired, it only seemed fitting that this would culminate in a Last Man Standing Match. Randy Orton wasted no time bringing the fight as he jumped Edge with an RKO Outta Nowhere and then another as soon as the bell rang. This would be the last of the action at ringside as the remainder of the bout spilled over into several backstage areas of the Performance Center. The Rated R Superstar was finally able to put The Viper down for the referee’s ten count after their backstage brawl escalated to the top of the trailer of a semi-truck. Edge delivered a spear to Orton and then utilized a pair of steel chairs to deliver a Conchairto to seal the deal.

In another questionable booking decision, The Street Profits defended their titles against the makeshift team of Austin Theory and Angel Garza. Austin Theory attempted a late pinfall on Angelo Dawkins when Montez Ford launched himself from the top turnbuckle onto Theory’s back allowing Dawkins to steal a pinfall.

After belittling Paige recently on Smackdown Live, Bayley found herself defending the title against four other women certainly stacking the odds against her. Tamina, after imposing her will for much of the early going, was the first eliminated after the other four competitors ganged up on and dog piled on her for the pinfall. Naomi was the second eliminated after she tapped out to the Bank Statement applied by Sasha Banks. This presented another numbers game as Lacey was left to fend for herself against Bayley and her cohort Sasha Banks. Banks soon became the recipient of an inadvertent knee from Bayley leading to some infighting between the two. Lacey capitalized on this and knocked out Sasha Banks with a Woman’s Right allowing her to eliminate The Boss leaving us with our final two participants. Lacey seemingly was moments away from winning her first title after landing the moonsault, however, Sasha Banks reemerged and drilled Evans with a backstabber. Bayley then took advantage and finished off The Sassy Southern Belle to retain her title.

Before John Cena was able to declare his absence from Wrestlemania this year, The Fiend intervened and posed a challenge which the 16-time champ aptly accepted. The match was declared a Firefly Funhouse Match - one that nobody had a clue what it would entail heading in. This ended up being a glorified montage of WWE and WCW pop culture references along with a brief history of Bray Wyatt and John Cena that concluded with The Fiend taking Cena down with the Mandible Claw as Bray Wyatt counted the pinfall.

Drew McIntyre’s long journey to the main event of Wrestlemania became a reality after he derailed Brock Lesnar’s torrid elimination streak on his way to winning this year’s Royal Rumble match. Tonight he stepped toe to toe with The Beast, this time with the top prize in sports entertainment on the line. Lesnar’s efforts to manhandle McIntyre were briefly stunted as he answered with a Claymore Kick. This motivated Lesnar as he proceeded to take Drew to Suplex City and delivered three consecutive F5s - all of which were followed by failed pinfall attempts. Brock’s fourth F5 was reversed by McIntyre who answered with three consecutive Claymore Kicks - the last of which allowed him to stun the champ as he pinned him in front of a speechless Paul Heyman. 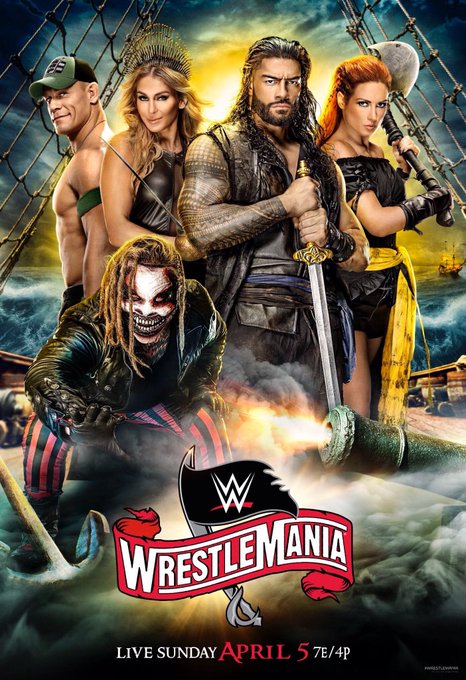