The latest pay-per-view installment of the “Quarantine Era” aired live from the WWE Performance Center in Orlando, Florida as we were presented with Extreme Rules…correction…The Horror Show at Extreme Rules. Yes, you read that correctly…the WWE decided to rename the event by prefacing the normal Extreme Rules moniker with “The Horror Show.” While I understand this is likely tied to the main event where Bray Wyatt challenged Braun Strowman for the Universal Championship, this name certainly could open WWE up to some ridicule. For instance, if this show doesn’t deliver, well, it will be considered a “horror show” - just not for the reason WWE intended. After last night’s Impact Wrestling Slammiversary show saw the debuts/returns of Gallows & Anderson, Eric Young, EC3, Heath Slater, Alex Shelley, and Chris Sabin, WWE had a lot to live up to in the eyes of the less than casual fan. Tonight’s show featured six matches and was headlined with the aforementioned Wyatt Swamp Fight between Bray Wyatt and Universal Champion Braun Strowman.

An ongoing feud between these teams culminated this evening in a Tables Match for the Smackdown Tag Team Championship. Following a rather pedestrian match, the ending came in spectacular fashion. Two tables were stacked on top of each other outside the ring as Cesaro found himself jockeying for position with Kofi on the top turnbuckle. As it appeared that Kofi was going to escape disaster, Nakamura met them on the ring apron and delivered a brutal kick to Kingston’s back. This allowed Cesaro to power bomb Kofi through both tables solidifying their victory.

Riding the heels of a 282 day stretch as the Smackdown Women’s champion (and currently half of the Smackdown Women’s Tag Team Champions with Sasha Banks), Bayley put the title on the line against the underrated Nikki Cross this evening. Bayley was in dire straits late in the bout after she received a neck breaker to the arena floor. After the women returned to the ring, Banks handed her Boss ring off to Bayley who viciously punched Cross in the stomach and followed it up with a face plant to retain her title.

MVP was scheduled to challenge Apollo Crews for the United States Championship, however, Crews failed a “pre-match physical.” The announce team cited this was from an injury sustained a month ago at the hands of MVP’s cohort Bobby Lashley, however, one has to wonder if perhaps he entered the venue with a fever or other Coronavirus symptoms. Nonetheless, MVP proceeded to walk down to the ring, pick up the newly designed United States Championship, and proclaim himself the new champion by forfeit.

This had to be one of the most ridiculous stipulations I’ve ever heard of…at least when Abdullah the Butcher was “electrocuted” at the conclusion of the infamous Chamber of Horrors Match in WCW back in the early ‘90s, they made it appear somewhat realistic albeit comedic at the same time. Anyway, Rollins pressed Mysterio’s face into the corner of a ring stair allegedly inflicting an eye injury a few weeks back. That coupled with the ongoing inclusion of Rey’s son Dominic being targeted by the Monday Night Messiah, we have arrived at this match. The announce team actually said the winner would be declared by removing one of his opponent’s eyes - really??? This match was one of the worst I’ve ever seen. The two men spent the majority of the bout trying to puncture out the other’s eyes with various tools, pens, and edges of ring stairs. The conclusion finally came after Rollins pressed Mysterio’s eye into the edge of a ring stair until after the referee put it, it was hanging out. Following this I personally hope the rumors are true that Rey’s contract is up because it would be nice to see such a legendary competitor used in a promotion like AEW where his talent would be respected and he would be utilized as something more than a sideshow attraction.

In what was looking to be a nice recovery to the preceeding shit show of a match, a very competitive title bout ended in ludicrous fashion. As Banks stood with a title belt in hand poised to strike Asuka when she returned to her feet, Asuka sprung up and spewed the green mist - the only problem was Banks ducked and left the referee to receive the full brunt of it in his face. Bayley then proceeded to remove the referee’s shirt and put it on herself. After Banks took down Asuka and covered her, Bayley counted the pinfall and Sasha stole the title proclaiming herself champion.

Ziggler found himself in this match after he promptly confronted the champ following his trade to RAW along with Bobby Roode for AJ Styles. Ziggler told McIntyre that he was owed a match based on their extensive history and that he would keep the stipulation for the contest a secret until the night of Extreme Rules. Before the bell rang, Ziggler announced that the match would be contested under extreme rules…for him only. Ziggler also stated that if McIntyre were disqualified or counted out, he would also relinquish the title. Ziggler put forth a solid effort despite the fact he stacked the deck against McIntyre, however, the defending champ took everything he had and finally closed the contest with a brutal Claymore kick to successfully retain his title.

After Wyatt’s attempts to awaken Strowman’s dark side from his early days as a member of the Wyatt family to no avail, Bray revived his original cult leader persona in the fashion of Waylon Mercy. This set the stage for another cinematic pay per view main event in the form of a Wyatt Swamp Fight. Sadly, this did not come anywhere close to reaching the bar established by the Undertaker vs. AJ Styles clash at Wrestlemania - in fact it was just plain bad. The conclusion found Wyatt and Strowman fighting on a pier as Braun kicked Bray into the water thinking the fight was over. Next, a hand emerged from the water, grabbed Strowman by the throat, and dragged him into the swampy abyss. After the two struggled for a few moments, the face of The Fiend emerged from the water as the broadcast ended. Apparently, there was no winner - at least not in the traditional sense. 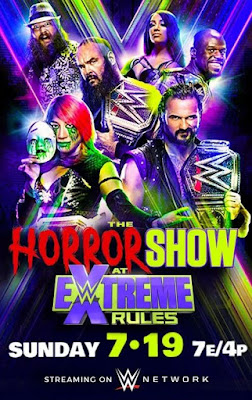